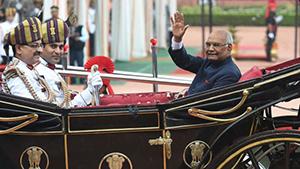 Soutik Biswas India correspondent
Does the Indian president serve a purely ceremonial role? Is this a mere figurehead who, in the words of former prime minister Jawaharlal Nehru, is a “head that neither reigns nor governs”, and holds a position of “authority or dignity” more than anything else?

Last month’s election of Ram Nath Kovind as the republic’s 14th president reignited the debate. In his inaugural speech, President Kovind, a former spokesman for the ruling BJP, promised citizens he would “stay true to the trust that they have bestowed me”.
So do Indians need an assertive or pliant president? Should they be merely a titular head? Are Indian presidents mere “rubber stamps”? And what happens when the president acts in an assertive and/or partisan manner?
The Indian presidency differs from most presidencies across the world. The president does not exercise executive powers – he is the head of the state, and is required by the constitution to act on the advice of ministers.
So the role is more akin to that of the British monarch or monarchs in countries like the Netherlands or Spain: a referee over a parliamentary system where ministers possess the real power. Countries like Germany and Israel have presidencies similar to India’s.
But James Manor, a professor at the London-based Institute of Commonwealth Studies who has extensively researched the presidency, says Indian presidents are “not entirely rubber stamps”.
They can ask ministers to reconsider actions, offer them private advice and convey warnings. They also make public speeches which indicate, at least subtly, “some differences of view with the government, and which may swing public opinion”.
Also, more importantly, after elections, presidents are free to act – and must act – without the advice of ministers if no party has been able to garner a parliamentary majority. They also have some freedom to decide whether to accept a prime minister’s request for dissolving the parliament to enable a general election.
India’s first president, Rajendra Prasad, frequently disagreed with prime minister Nehru and sometimes subtly criticised the government in his public statements.
In what many believe was a shameful low for the presidency, the fifth president. Fakhruddin Ali Ahmed, readily acquiesced to former prime minister Indira Gandhi’s demand for a declaration to impose a state of emergency – when civil liberties were suspended – in 1975.
Stormy relationship
The seventh president, Giani Zail Singh, – a former Congress government home minister who once told the parliament that he admired Adolf Hitler – had a stormy relationship with the then prime minister Rajiv Gandhi.
In 1987, he withheld assent from a controversial bill passed by the parliament. (The bill was later withdrawn.) There were reports that Mr Singh, who died in 1994 , had even considered sacking Mr Gandhi’s government over an arms purchasing scandal.
The ninth incumbent Shankar Dayal Sharma returned two executive orders to the cabinet in 1996 because they had been “inappropriately” issued before a general election.
And his successor, KR Narayanan, a London School of Economics-educated former diplomat and Dalit (formerly known as “untouchable”), was arguably one of India’s most assertive presidents. He delivered speeches which many believed were not vetted by the government and, in a surprising break from protocol, even gave an interview to a senior journalist.
Mr Narayanan also sent back a proposal to impose direct rule in the northern state of Uttar Pradesh to the cabinet, asking the ministers to reconsider it. He bluntly said: “I am not a rubber stamp.”
And he angered many in the government and the media for chiding visiting US president Bill Clinton at a state banquet, provoking the New York Times to comment that “the tensions inherent in forging an Indian-American friendship surfaced with Mr Narayanan’s speech”.
His successor APJ Kalam, one of the most popular Indian presidents, was more restrained, once returning an office of profit bill for reconsideration. The parliament returned the bill to him without changes, and he signed it into law.
‘More assertive’
Prof Manor believes Mr Kovind’s predecessor, Pranab Mukherjee, a veteran Congress party leader and a former senior minister, was “more assertive than nearly all previous presidents”.
Although he rejected a record 28 mercy pleas of death row convicts during his tenure, Mr Mukherjee defied the advice of the government and commuted the death sentences of four convicts in January.
“Mr Mukherjee had the right to refer those cases back to ministers for reconsideration once, but when they reiterated the advice, he is required to accept it. He refused to do so,” explains Prof Manor.
“That was potentially explosive politically, and might have led to a constitutional crisis. But the prime minister and cabinet apparently decided not to make an issue of it – because Mr Mukherjee’s term was soon to end, and because a confrontation would have prevented them from doing other important things.”
Many fear that governments with overwhelming majorities – like the present BJP – could easily lead to weakening of presidents.
That may not be entirely true. Ruling parties have enjoyed hefty majorities for most of the period since 1947. “This alone has not led – under Congress or the BJP – to a weakening of the presidency. When a party or an alliance has a Lok Sabha majority, the president is supposed to have very limited powers,” says Prof Manor.
“I am not a big fan of the [Narendra] Modi government, but I don’t think [it] undermined the office when Mr Mukherjee was president. Now that they have a president with whom they are comfortable, they are unlikely to do so in the future.”