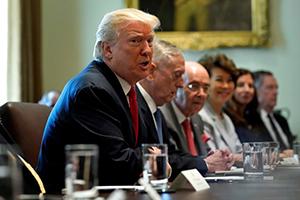 It’s already one of the most isolated countries in the world. Can further financial punishment really change its decisions?
Krishnadev Calamur- The Atlantic

The Trump administration’s public response to North Korea’s latest ICBM test has been to criticize China for not doing enough to pressure its client in Pyongyang.
President Trump said China was doing “nothing” on North Korea while “our foolish past leaders have allowed them to make hundreds of billions of dollars a year in trade.” (Xinhua, the state-run Chinese news agency, rejected that linkage in a commentary Monday.) Nikki Haley, the U.S. envoy to the UN, said China “must decide whether it is finally willing to” enforce existing resolutions against North Korea. Vice President Mike Pence called on “China to use its “influence … to encourage North Korea to join the family of nations.” But China’s willingness to act against North Korea may be limited.
“I don’t believe that the West overestimates the influence China could have. I think we do overestimate the degree to which China will use its influence,” Abraham Denmark, the Obama-era deputy assistant secretary of defense for East Asia, told me.
Denmark pointed out that North Korea gets much of its foreign capital through trade with China, which has in the past used that trade as leverage against Pyongyang. But China hasn’t used that leverage to the fullest extent because, Denmark said, it fears a collapse in North Korea.
“They’ve been very clear that they are willing to inflict some economic pain on North Korea, but not to the degree that it would threaten the stability of the regime,” he said. “And that is why China continues to pump the brakes on international sanctions.”
North Korea is subject to a range of international sanctions that prohibit the sale of military equipment and luxury goods, that target its financial system, and that ban the trade of certain commodities that provide a valuable financial lifeline to the North. But those international sanctions have been limited in their impact and there’s little indication they have either curbed North Korea’s missile and nuclear programs or blocked its access to the international financial system. U.S.-specific sanctions against Pyongyang, imposed last year, target entities that cooperate with North Korea on, among other things, its weapons programs and trade in commodities. It also sanctions North Korean officials over the country’s human-rights record. The U.S. also designated North Korea a primary money-laundering concern—a move that should prompt stricter sanctions.
Critics of the U.S. policy toward the North argue the Trump administration could do much more to target Pyongyang not only by sanctioning its officials and entities, but also those from its allies that enable the North’s continued survival.
Bruce Klingner, a senior research fellow for Northeast Asia at the Heritage Foundation who worked for two decades at the CIA and the Defense Intelligence Agency, told me the U.S. could use targeted financial steps to unilaterally target North Korea. He said the vast majority of all financial transactions in the world, including North Korea’s, go through U.S. banks that are regulated by the Treasury Department.
“That actually gives us tremendous leverage to seize and freeze assets, to impose fines, and to identify entities as money-laundering concerns, which means that they cannot access the U.S. financial system, which is the kiss of death for a financial institution,” Klingner said. “And it also makes them an international pariah that no one else will want to deal with.”
Klingner pointed out that the U.S. has fined European banks $12 billion for laundering money for Iran, but has not fined Chinese financial institutions for laundering money for North Korea—for which he blamed the Obama administration.
“If you talk to people who work sanctions in the U.S. government, they’ll say they’ve had evidence for years against North Korean and Chinese violators of U.S. law, but they were prevented from implementing it by senior officials,” Klingner said, adding the U.S. must defend and enforce its laws.
He compared the situation with China and North Korea to a bank president witnessing “someone physically entering his bank with suitcases of cash and knowing it’s for illicit activities.”
“The bank president is not only allowed to defend his bank, he’s obligated to do so, otherwise he’s in violation of U.S. law,” Klingner said. “Similarly, Chinese, and North Korean, and other entities have been digitally entering U.S. banks and committing money laundering. If we don’t enforce our laws, we’re giving de facto immunity from U.S. laws simply because they are Chinese.”
Denmark pointed out that the Obama administration put in place some of the strongest international sanctions against North Korea—following congressional passage of the North Korea Sanctions and Policy Enhancement Act of 2016—but added “much more can be done—especially unilaterally.”
This, he said, could take the form of secondary sanctions, which would target entities and individuals in third countries that do business with North Korea. China, North Korea’s largest trading partner, would be heavily affected if the U.S. takes this route. Indeed, the Trump administration has already begun taking this approach. Last month, it targeted two Chinese citizens, a Chinese shipping company, and a Chinese bank for their ties to North Korea’s nuclear and missile programs.
Still, it’s not clear whether any amount of diplomatic pressure can get North Korea to change its behavior. Kim Jong Un has shown that he won’t abandon his nuclear or missile programs even in the face of intense international pressure—no matter what the cost. Indeed, Klingner said that North Korean officials told him last month that “denuclearization is totally off the table.”
Trump, speaking at a Cabinet meeting Monday, sounded confident that the U.S. could resolve the issue.
“We’ll handle North Korea. We’ll be able to handle North Korea,” he said. “It will be handled. We handle everything.”