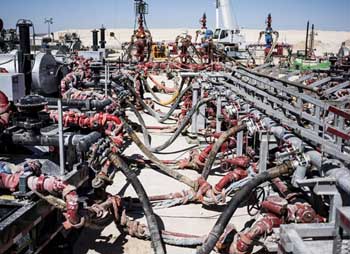 By Irina Slav
Optimism, at first tentative and in the last week more pronounced, has been taking over oil markets. Short positions on WTI were at a three-month low as of Monday, according to Bloomberg, while long positions continued to rise.

The last couple of weeks have seen some strong indications that the oil market is returning to balance. The latest OPEC meeting with Russia in St. Petersburg on July 24 had Saudi Arabia pledge to further cut its crude exports from this month, and Russia’s Energy Minister said that global inventories have shrunk by 350 million barrels since last December. At the same meeting, Nigeria said it was willing to stop increasing its production once it reaches 1.8 million barrels of crude oil production daily.
In the U.S., there were indications of a slowdown in the growth of shale oil production, with new rigs being added in smaller numbers amid warnings that if prices fall further towards US$40 a barrel, production growth will become unsustainable for many producers.
And then, yesterday, bulls were dealt a blow. Three separate surveys, from Reuters, Bloomberg, and Petro-Logistics, suggested OPEC’s July output had grown. The Reuters poll was the most optimistic, pegging the increase at 90,000 bpd. Petro-Logistics estimated it at 145,000 bpd, and Bloomberg’s was the most pessimistic, seeing the increase at 210,000 bpd.
Separately, data from Kpler showed OPEC’s crude oil exports reached 26.68 million bpd last month, up by 388,000 bpd on June. The UAE led the increase, with a 326,000-bpd boost in its exports, while Kuwait was responsible for the biggest decline in exports, at 241,000 bpd. OPEC is meeting next week again to discuss compliance with the cut deal.
To top it off, the American Petroleum Institute estimated U.S. commercial oil inventories went up by 1.78 million barrels last week, versus analyst expectations of a hefty draw, at 2.8-2.9 million barrels. While API’s figures are not the official ones, a surprise build or draw reported by the industry body regularly swings prices, at least until the EIA comes in with the official figures. These, it’s worth noting, have been largely in line with API estimates in the last couple of months.

So, is there a justification for the growing bullish sentiment? There seems to be. After the initial euphoria from the start of the year, when Brent touched US$56, both OPEC and the shale players seem to be settling down and adjusting their expectations to reality. This reality is that it will take more than a cut of 1.8 million bpd to bring oil’s fundamentals back to balance.
Yet, this optimism should be cautious. Big Oil majors have reported improvements in their second-quarter performance from a year ago with most of the improvements resulting from the higher oil prices in the first half of the year. But the rise has not been consistent, as we’ve seen, and Big Oil said it will remain frugal during the second half.
That’s an approach that oil bulls might want to adopt, too, until we get some hard evidence that global supplies are indeed falling consistently and demand is growing.
By Irina Slav for Oilprice.com
More Top Reads From Oilprice.com: