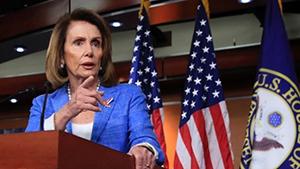 By Brooke Singman -FoxNews.com
After fighting Republicans tooth-and-nail for years on their plans to repeal and replace ObamaCare, Democrats have in a matter of days started touting a slew of proposals aimed at improving the ailing health care system.

The Democrats’ scramble to tackle the problem comes after Senate Republicans endured a high-profile failure on their so-called ‘skinny repeal’ replacement bill last week, leaving unclear whether Republicans can ever get the votes to go it alone on health care.
Given the difficulty in locking down GOP support, some Republicans have welcomed the prospect of bipartisan talks. At the same time, some Democratic ideas — such as those that swell the deficit — may find little support on the Republican side.
But the proposals could reflect a party, like the GOP, concerned about public backlash if ObamaCare’s problems escalate into the 2018 midterm election year — amid President Trump’s warnings of a looming collapse. Insurers already are seeking big premium hikes for next year, upping the pressure on Congress to make changes.
“Voters will take this out on both parties next year,” warned Jason Pye, vice president of legislative affairs at the conservative FreedomWorks.
Zero Democrats voted for the latest plan that failed in the Senate, a factor that fuels skepticism on the Republican side about calls, like that from House Minority Leader Nancy Pelosi, for “serious bipartisan conversations.”
But former chief of staff to former Senate Minority Leader Harry Reid, D-Nev., David Krone told Fox News that Democrats are likely looking for a “new table,” so to speak.
“The table that existed was a partisan, Republican effort,” Krone said. “The loss last week by [Senate Majority Leader Mitch] McConnell showed Democrats that now is the time to find a new table—their own table—and start talking with some moderate Republicans.”
One House Democratic Leadership aide told Fox News that Democrats have had intentions to revamp weaknesses in ObamaCare for some time, but faced political pressure from the Obama White House.
“Democrats have always had a vision for how to fundamentally improve health care in this country whereas Republicans have spent seven years fixated on one thing: repealing it,” House Democratic Caucus Chairman Rep. Joe Crowley, D-N.Y., told Fox News.
This week, multiple factions of the House Democratic Caucus met behind closed doors to discuss potential proposals.
Some would aim to codify cost-sharing reduction payments, lower the cost of prescription drugs, and strengthen consumer protections to ensure premium increases are stabilized, according to the aide.
Another Democratic proposal reportedly would allow people ages 50-64 to buy into Medicare.
Staffers from both the Congressional Progressive Caucus and the Congressional Black Caucus told Fox News they plan to introduce ideas as well. The CPC will focus on additional options for public health care access to address counties losing insurers; and the CBC will roll out a “mini omnibus bill” for health care, pulling together legislation from all 49 members of their caucus and focusing on “expanding community health centers.”
Meanwhile, a bipartisan group has formed in the House calling themselves “The Problem Solvers,” also eyeing potential health care fixes.
“I don’t think anyone should get too excited or too critical,” Krone said. “Just let them go talk and see what comes out of it—both parties need to have an honest discussion.”
Also this week, leaders of the Senate Health, Education, Pension & Labor Committee announced plans to begin public hearings for debate on health care starting Sept. 4, something Sen. John McCain (who helped kill the ‘skinny repeal’) suggested last week.
Despite the bipartisanship calls, one thing is clear: Democrats will never agree to conservatives’ call for an outright repeal.
“Republicans have to approach working with Democrats very cautiously because they’ve made it very clear what they plan to pursue will be difficult for Republicans to deal with,” Pye said.
He said up to this point, “Democrats haven’t offered solutions” while “Republicans have the power but can’t agree on a plan.”
As for the prospect of a feared voter backlash, Pelosi said on “Fox News Sunday” over the weekend that 2018 was “so unimportant” and Democrats need to focus on “debate on a better deal.”
Krone said Democrats’ motives are “sincere.” But he added that “anybody who says politics is not part of their calculation is lying—politics is always in the back of your mind.”
Nevertheless, some Senate Republicans have welcomed Democrats to the process. Sen. Jeff Flake, R-Ariz., said they needed to “stick with” health care and “end it.”
“The end is going to be sitting down with our colleagues from the other side of the aisle and getting something passed,” Flake said on Fox News’ “America’s Newsroom.”
This all comes as Trump has repeatedly warned Republicans, and Democrats, that the health care system could collapse if they don’t pass a bill.
“I hope Republicans will take their responsibility to govern seriously and work with us on bipartisan solutions,” House Democratic Whip Steny Hoyer, D-Md., told Fox News. “They control all levers of government and are ultimately responsible for any changes that people see to the health care system.”
Brooke Singman is a Reporter for Fox News. Follow her on Twitter at @brookefoxnews.