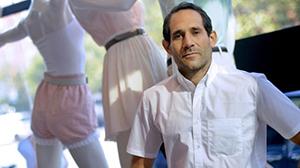 Neha Kale
Dov Charney refuses to disappear. In a recent interview with Bloomberg, the disgraced CEO of American Apparel, whose famously skeezy​ behaviour saw him ousted from his business two years ago, unveiled a thriving new venture — a wholesale basics company called, you guessed it, Los Angeles Apparel.

“It still is a nail-biter,” says Charney, who has re-hired workers who were fired when American Apparel went bankrupt, tapped into his old supply chain and predicts that sales will top $US20 million [$A25 million] over the next 12 months. “That’s part of the chills and thrills of starting up a business. You’re always on edge, but I love it. The workers are happy. It’s exciting. We want to prove something.”

So far, the only thing that Charney (who’s wisely traded mutton-chop sideburns for a Steve Jobs monochrome) has proven is how fast powerful, white dudes who present as reformed bad boys can make cultural amnesia take hold.

To date, Charney strenuously denies any wrongdoing and the string of allegations issued by multiple female employees have been settled privately.

American Apparel employees were asked to sign agreements requiring them to arbitrate disputes out of court, a clause that let the company hide misconduct, according to a July 2014 report by The New York Times.

But as Tom Hawking points out in a June 2014 article for Flavorwire, if this track record eventually got him fired it’s not because American Apparel board members were filled with concern about the women Charney exploited.

It’s because the brand’s hipster demographic stopped buying spandex mini-skirts and electric-blue jeggings. (At its height, American Apparel made over $US600 million [$A753 million], but was declared bankrupt in January this year.)

Few secret unions catch you out quite like the one between patriarchy and capitalism.

Sure, it’s hard to imagine anyone who’s higher in the creep stakes than Charney, who’d regularly send his employees sexts before asking that they delete them. But it’s important to remember that he fits squarely into a cultural narrative that’s always rewarded and mythologised eccentric and visionary businessmen — even when their “anti-establishment” antics veer away from flouting convention and disrupting industries and into sexual innuendo, predatory behaviour and outright abuse.

Richard Branson, patron saint of armchair entrepreneurs everywhere, has long used sex as part of his marketing, going as far as to launch a seat-to-seat delivery service to encourage in-flight hook-ups and declaring that his airline is not the type to object to customers who join the mile-high club (ew).

Jordan Belfort, the corrupt stockbroker who channelled the funds he swindled from investors into cocaine benders in strip clubs, was the subject of Wolf of Wall Street, a movie that came across less cautionary tale than guidebook.

Author and journalist Neil Strauss was able to spin a history of emotionally manipulating women into a New York Times bestseller and a global academy of “pick-up artists”.

But in Charney’s case, it’s impossible to separate his unorthodox approach to business — the result of male power — from the less savoury aspects of his history (male power taken to its monstrous extremes).

And in a world in which men can translate their notoriety into cultural and literal currency, it isn’t long before serious transgressions start to look like quirks of personality; biographical footnotes rather than damning evidence that could destroy their livelihoods.

Last year Strauss sold us The Truth, a sob story about his sex addiction and redemption. Belfort has segued his knowledge of ethical persuasion techniques into a million-dollar motivational speaking career. Is Charney planning to resume his old ways this time round?

“That question is private and it should be private,” he tells the Bloomberg interviewer. “I love the company, and I love the people I work with. We’ve very close and we’re holding hands and walking through the fire. We intend to be successful.”

How much do you want to bet that he will be?