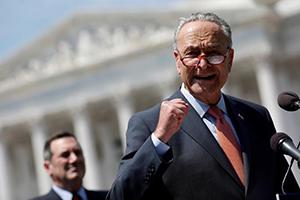 David Lawder and Lesley Wroughton
WASHINGTON (Reuters) – Three top Democratic senators, in a rare show of bipartisanship, on Wednesday urged U.S. President Donald Trump to stand up to China as he prepares to launch an inquiry into Beijing’s intellectual property and trade practices in coming days.

Senate Democratic leader Chuck Schumer pressed the Republican president to skip the investigation and go straight to trade action against China.
“We should certainly go after them,” said Schumer in a statement. Senators Ron Wyden of Oregon and Sherrod Brown of Ohio also urged Trump to rein in China.
Tensions between Washington and Beijing have escalated in recent months as Trump has pressed China to cut steel production to ease global oversupply and rein in North Korea’s missile program.
Sources familiar with the current discussions said Trump was expected to issue a presidential memorandum in coming days, citing Chinese theft of intellectual property as a problem. The European Union, Japan, Germany and Canada have all expressed concern over China’s behavior on intellectual property theft.
U.S. Trade Representative Robert Lighthizer would then initiate an investigation under the Trade Act of 1974’s Section 301, which allows the president to unilaterally impose tariffs or other trade restrictions to protect U.S. industries, the sources said.
It is unclear whether such a probe would result in trade sanctions against China, which Beijing would almost certainly challenge before the World Trade Organization.
The Chinese Embassy in Washington said in a statement to Reuters that China “opposes unilateral actions and trade protectionism in any form.”
Leverage for Negotiations
U.S. Section 301 investigations have not led to trade sanctions since the WTO was launched in 1995. In the 1980s, Section 301 tariffs were levied against Japanese motorcycles, steel and other products.
Senator Ron Wyden (D-OR) speaks to reporters ahead of the weekly party luncheons on Capitol Hill in Washington, U.S., August 1, 2017.Aaron P. Bernstein
“This could merely be leverage for bilateral negotiations,” James Bacchus, a former WTO chief judge and USTR official, said of a China intellectual property probe.
Some trade lawyers said that WTO does not have jurisdiction over investment rules such as China’s requirements that foreign companies transfer technology to their joint venture partners, allowing sanctions to proceed outside the WTO’s dispute settlement system.
But Bacchus argued the United States has an obligation to turn first to the Geneva-based institution to resolve trade disputes, adding: “There is an obligation in WTO to enforce intellectual property rights that is not fully explored.”
Sen. Sherrod Brown (D-OH) speaks with the media following the weekly policy luncheons on Capitol Hill in Washington, D.C., U.S., June 6, 2017.Aaron P. Bernstein
Lighthizer and Trump’s Commerce Secretary, Wilbur Ross, have complained the WTO is slow to resolve disputes and biased against the United States.
The threat comes at a time when Trump has become increasingly frustrated with the level of support from Beijing to pressure Pyongyang to give up its nuclear and missile program.
Trump has said in the past that China would get better treatment on trade with the United States if it acted more forcefully against Pyongyang. Beijing has said its influence on North Korea is limited.
China counters that trade between the two nations benefits both sides, and that Beijing is willing to improve trade ties.
A senior Chinese official said on Monday there was no link between North Korea’s nuclear program and China-U.S. trade.
Wyden, the top Democrat on the Senate Finance Committee, wrote to Lighthizer urging action to stop China from pressuring U.S. tech companies into giving up intellectual property rights.
Wyden’s state of Oregon is home to several companies that could make a case regarding intellectual property rights and China, including Nike Inc and FLIR Systems Inc.
AdditIonal reporting by Steve Holland and Ginger Gibson; Editing by Kevin Drawbaugh and Lisa Shumaker