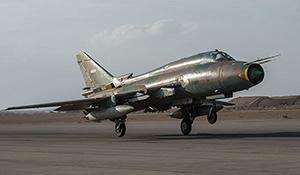 TEHRAN (FNA)- The Syrian army’s air and ground forces heavily attacked the ISIL positions and moves to break the siege on Deir Ezzur, blowing up several arms and ammunition depots.

The Syrian fighter jets launched heavy airstrikes on ISIL bases in the villages of al-Baqaliyeh and Tal Aloush in Southern Deir Ezzur on Wednesday, destroying several hideouts and weapons caches.
A large number of terrorists were also killed in the operations.
Meantime, the Syrian army’s artillery unit targeted one of the buildings occupied by the ISIL in al-Rasafah district in Deir Ezzur city, killing and wounding all terrorists inside.
Also, during the artillery and missile attacks against the ISIL positions in Panorama region and Deir Ezzur cemetery in the Southern parts of the city, a number of militants were killed and wounded.
In a relevant development on Wednesday, the Syrian army troops engaged in fierce clashes with ISIL in the outskirts of Deir Ezzur city and managed to repel terrorists’ offensive.
The army men engaged in heavy fighting with ISIL in Regimen 137 bade and near al-Baqaliyeh village and repelled their attack after inflicting a number of casualties on the militants.
In the meantime, the army soldiers clashed with ISIL in the Southern and Southwestern outskirts of Deir Ezzur, killing a large number of militants and destroying their equipment.