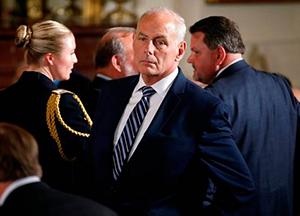 Rob Crilly
There was never any doubt about John Kelly the man.

After his appointment as White House chief of staff, one particular passage from a book on his rise through the Marines Corps was circulated among administration officials. The anecdote from ‘The March Up’, by retired Marine Bing West, was offered as evidence of character.
With bodies lying at the side of the road during the advance on Baghdad during the Iraq War, it describes how Kelly turned to his commanders and told them the numbers of civilian casualties was unacceptable.
When they replied defensively, saying that they had a duty to protect their own men, Kelly silenced them.
“‘Don’t go there with me,’ Kelly shot back, cutting off debate. He had been in the infantry 30 years and knew the range of every weapon.”
Friends say his integrity and leadership are unimpeachable. What has been in doubt, ever since he was named White House chief of staff on Friday, was Kelly the politician. Did he have the political nous to navigate such treacherous terrain as a fractious administration, riven into at least five rival power centres?
What did for Reince Priebus, his predecessor, was a broken chain of command. Mr Trump sat at the apex, above the competing fray. His daughter and her husband – Ivanka and Jared – had special dispensation to go around the man who was supposed to be the president’s gatekeeper.
So too Steve Bannon, the chief strategist, who had been told he could operate on an equal footing to the chief of staff. Three chiefs of staff is a recipe for confusion.
And then there was Anthony Scaramucci, the Trump Mini-Me taken on as communications director, who made it clear he only answered to the president.
Maybe that was the way Mr Trump liked to run things. But you can bet that a military man, schooled in the linear chain of command operated by armed services, would see things differently.
The early indications are that Mr Kelly has got his way.
First, Mr Scaramucci has gone. His role as freelancing fire-starter was clearly a liability. And all the indications are that the new chief of staff wanted to set an example: Every action, every word, every cheap joke, expletive and self-serving leak reflects on the boss in the Oval Office.
Second, as Sarah Huckabee Sanders said in her briefing, every member of staff is now expected to report to the chief of staff. There is now a clear chain of command from president, to Mr Kelly, to the rest. It is a sensible move, not just for Mr Kelly’s sanity.
It is an essential step to removing the air of chaos from this White House and to give it a fighting chance of ensuring everyone is pulling in the same direction.
Finding order from chaos on the battlefield is what good commanders do, as one Trump insider put it to me.
How long it will last is another matter.
We know that Mr Trump’s management style is to set competing power centres against each other. Mr Kelly may well find himself fighting his principal at every turn.
And do we really expect Ivanka to book appointments with her father by going through the corner room next to the Oval Office?
It has been a good first few days for Mr Kelly. Holding his gains will test every political bone in his body.(© Daily Telegraph London)