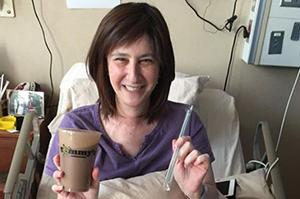 An Ohio restaurant has made a dying woman’s bittersweet last wish come true, by shipping a milkshake to her deathbed across the US.

Emily Pomeranz, who was in a hospice near Washington DC with pancreatic cancer, had a hankering to taste a mocha shake from her hometown diner.
She told her friend, Sam Klein, and he contacted Tommy’s in Cleveland Heights to arrange the long-distance order.
The drink reached her bedside four days before she passed away last Friday.
Mr Klein, who also grew up in the Cleveland area before moving to Washington DC, had asked his old friend during a visit to her hospice if she needed anything.
“She said with a smile, ‘I wish I could have one more Tommy’s mocha milkshake,'” Mr Klein said.
He said he contacted the general information email address for the restaurant.
“A few days later I got a call from Tommy Fello, the owner of Tommy’s. ‘Yes. We will figure out a way to do this,’ is what he said,” Mr Klein said in a Facebook post.
Mr Fello told Cleveland’s Fox 8 News that he had never dealt with an order like this one in the restaurant’s 47-year history.
“I wasn’t even sure if we’d be able to do it,” he said, adding that those involved had dubbed it the milkshake mission.
Mr Fello put the beverage on dry ice and paid $123 (£93) for overnight shipping 370 miles (600km) across the country.
Mr Klein said Ms Pomeranz, 50, was overjoyed to taste her favourite shake.
“I know Emily would love the fact that she’s making people feel good even though she’s not here with us anymore,” Mr Klein said.