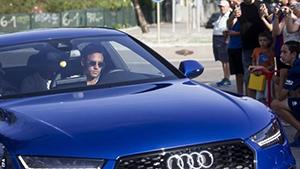 Neymar arrived for training at Barcelona on Wednesday, and told his team-mates he wanted to leave
Neymar will earn 865,000 euros (£775,477) a week when the Brazil forward completes his world record move from Barcelona to Paris St-Germain.

The 25-year-old’s wages will equate to 45m euros (£40.3m) a year before tax.
Barcelona have told the French club they must pay his 222m euro (£198m) fee “in full” and they are understood to be ready to meet his release clause.
It means PSG’s total outlay across the initial five-year deal will come to £400m.
The Brazil international arrived at training on Wednesday with his father and representative, and told the Spanish club he wanted to leave.
He was then given permission by Barca manager Ernesto Valverde not to train and to “sort out his future”.
The latest development comes two days after it emerged Barca were ready to push for a Financial Fair Play investigation if PSG signed Neymar.
That came after La Liga president Javier Tebas threatened, in an interview with Mundo Deportivo, a legal response against the former Ligue 1 champions if European football’s governing body failed to take action.
He also said PSG president Nasser Al-Khelaifi had been made aware of the Spanish league’s intentions.
Neymar reportedly earns more from his off-field endorsements than his playing contract
According to Forbes’ rich list, the Brazilian is currently the only footballer to earn more from his off-field endorsements than his playing contract at Barcelona.
Neymar’s sponsors include global brands such as Nike, Gillette, Panasonic and Beats by Dre and bring the 25-year-old in $22m (£16.6m) on top of his $15m (£11.3m) salary.
“He was the first soccer player to have his own custom Air Jordan sneakers made by the Swoosh,” says Forbes.
However, that will change when he completes a world-record move to PSG and collects a pre-tax weekly wage of 865,000 euros (£775,477) or 45m euros (£40.3m) a year.
That is more than current Barcelona team-mate Lionel Messi, who signed a new deal worth a reported £500k per week in July, and Real Madrid forward Cristiano Ronaldo’s £365,00-a-week deal.
It looks set to make the Brazilian the best-paid player in the world, overtaking Carlos Tevez who is said to earn £615,000 per week at Shanghai Shenhua.
Here is how Neymar’s deal shapes up to bumper contracts in other sports:
Messi leads tributes
Team-mate Messi has paid tribute to the 25-year-old. He wrote in an Instagram post: “It was a great pleasure to have shared all these years with you my friend Neymar. I wish you good luck in this new stage of your life. See you tomorrow.”
Neymar responded to the post saying: “Thank you brother.. I will miss you uncle!”
This content will not work on your device, please check Javascript and cookies are enabled or update your browser
Neymar moved to Barcelona from Brazilian club Santos in 2013 for £48.6m, and signed a new five-year deal with the 24-time Spanish champions in 2016.
His representative Wagner Ribeiro, who on Wednesday tweeted he was in Paris, said last year that his client had been offered a tax-free £650,000 a week to sign for the French club.
He also said the forward “was close to a move to Manchester United”.
Rumours of Neymar’s potential departure resurfaced recently, but club president Josep Maria Bartomeu told the BBC the player would be staying.
Neymar played for the Catalan side in the recent International Champions Cup in the United States, before travelling to China to fulfil commercial commitments.
He travelled back to Spain on Tuesday and returned to the club’s training ground on Wednesday.
The Brazilian has scored 105 goals for Barcelona, helping them to two league titles, three Copas del Rey and a Champions League crown.
Brazil star Neymar lights up 2014 World Cup
“Revons plus grand”
PSG’s motto is hard to avoid at their stadium, Parc de Princes.
The translation? “Dream bigger”
PSG’s owners, Qatari Sports Investment (QSI), are the upstarts within the European game and determined to disrupt the old order.
QSI is an arm of Qatar’s sovereign wealth fund – so PSG’s ambitions are backed by the enormous natural gas wealth of the Gulf state.
Qatar is locked in a bitter dispute with its Arab neighbours – so this transfer has a distinct political overtone as it seeks to show it will not be diminished or cowed by an ongoing trade blockade and a diplomatic war of words.
Having secured the World Cup in 2022, Doha sees PSG as one of the ways through which the state can achieve its ambitions.
Uefa’s Financial Fair Play regulations have certainly tempered PSG’s elaborate spending in recent seasons, and Neymar’s arrival would represent a serious challenge to the club in this respect – but there’s confidence within PSG’s boardroom that it will not be a significant issue.
Ultimately this deal will not be judged in the governmental salons of Doha nor on a spreadsheet. Instead, success must be delivered through PSG capturing arguably the club game’s greatest trophy, the Champions League.
What will Barcelona be missing?
Neymar is one third of Barcelona’s ‘MSN’ strikeforce, which also includes Lionel Messi and Luis Suarez.
In the past three seasons, they have scored 250 goals between them in 299 appearances.
But they do more than just score…