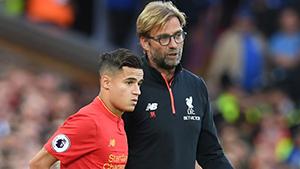 Check out all the latest rumours and gossip from Thursday’s national newspapers.

Virgil van Dijk is close to forcing his way out of Southampton after a series of tense meetings with the club this week.

Their imminent deal for Barcelona forward Neymar is set to cost Paris Saint-Germain a total of £576m over five years – and earn the Brazilian £27m-a-year.

Everton expect to finally tie up a £45m deal for Swansea’s Gylfi Sigurdsson by the weekend.

Barcelona will step up their chase for Liverpool star Philippe Coutinho by making a new bid of €120m.
THE SUN

Chelsea face the prospect of paying outcast Diego Costa’s wages until January as the forward is not keen on joining AC Milan.

Ouasim Bouy is on his way to Spanish Segunda side Cultural Leonesa, after penning a four-year deal with Leeds United.

United are also interested in 22-year-old Anderlecht midfielder Leander Dendoncker, but they’ll not be making a bid in this window.

Swansea City’s head coach, Paul Clement, has said Gylfi Sigurdsson’s proposed move to Everton could be completed “in the next couple of days”.
DAILY TELEGRAPH

Jack Wilshere wants to stay and try to salvage his flagging Arsenal career after returning this week to full training following his broken leg.

UEFA will demand to know how Paris Saint-Germain intend to finance their world-record £198m transfer deal for Barcelona’s Brazilian superstar Neymar.
THE INDEPENDENT

While Barcelona want to sign Juventus forward Paulo Dybala, they are more likely to move for Borussia Dortmund’s Ousmane Dembele.

Finally, Leicester City could be about to sell Riyad Mahrez to Roma in order to sign Manchester City striker Kelechi Iheanacho.

Gylfi Sigurdsson’s £50m move to Everton is expected to be completed by the weekend.

Liverpool boss Jurgen Klopp has warned Barcelona not to even waste their time trying to sign Philippe Coutinho as Neymar’s replacement.

Southampton face being backed into a corner over their refusal to sell Virgil van Dijk to Liverpool.
DAILY EXPRESS

Jose Mourinho would like to make three more additions to his Manchester United squad before the end of the transfer window.

Manchester United have reportedly given up on trying to sign Inter Milan winger Ivan Perisic.