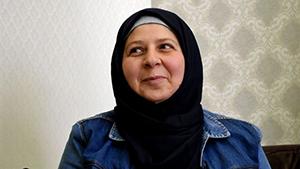 Late last year, the BBC’s Mike Thomson received a desperate call from a bomb shelter in the Syrian city of Aleppo. It came from head teacher and mother of three Oum Mudar, who pleaded for help getting her terrified family out of the rebel-held part of the city. When Thomson was unable to make contact again, he feared the worst – but, as he explains here, months later a text message arrived that revealed Oum’s fate.