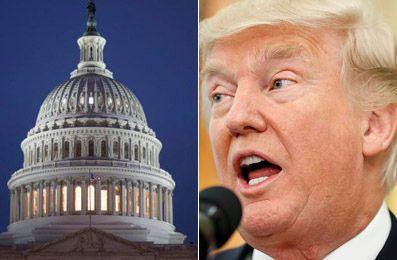 By Margaret Talev
President Donald Trump signed a Russia sanctions bill Congress forced on him, adding a statement saying the administration will carry out the law but with reservations about its impact and the constitutionality of some provisions.

In a statement Wednesday accompanying the notice that he signed into law the legislation, which also targets Iran and North Korea, Trump laid out a list of concerns. He said it encroaches on presidential authority, may hurt U.S. ability to work with allies and could have unintended consequences for American companies.
“While I favor tough measures to punish and deter aggressive and destabilizing behavior by Iran, North Korea, and Russia, this legislation is significantly flawed,” the statement released by the White House said.
Trump’s statement doesn’t signal any intent to bypass or circumvent aspects of the law. Instead, the president indicates he intends for his administration to carry it out in a way consistent with his constitutional authority, language that leaves open some room for interpretation of how the law is executed.
Trump’s concerns cover four areas: encroachment on executive authority, unintentional harm to U.S. companies and business, as well as U.S. international partners, and limits on the flexibility of the administration to act in concert with allies in dealing with Russia.
The European Union has warned of possible retaliation if European companies are hobbled by sanctions aimed at squeezing Russia’s energy exports.
Veto-Proof
The legislation, passed by overwhelming, veto-proof margins in the U.S. House and Senate, strengthens sanctions on Russia and gives Congress the power to block the president from lifting them.
The Russia sanctions and the restrictions placed on Trump marked a rare rebuke for the president from congressional Republicans. Lawmakers decided to limit the president’s ability to ease penalties on Russia at a time when House and Senate committees and the Federal Bureau of Investigation are examining whether some members of his political campaign may have colluded with Russia’s interference in the 2016 presidential campaign.
Passage of the legislation sparked retaliation by the Russian government, which ordered the U.S. to remove hundreds of embassy and other personnel in the country. The events have raised tension between the two nuclear-armed nations, putting the relationship at its lowest point since the Cold War.
Russian Prime Minister Dmitry Medvedev wrote on Facebook that by signing the law the Trump administration “has shown its complete weakness” and that the U.S.-Russia relations are likely to remain tense for years to come.
“Hopes of ties improved with new American administration came to an end,” Medvedev wrote.
Senator Bob Corker, chairman of the Senate Foreign Relations Committee, said he wasn’t worried that the law might further erode U.S.-Russia relations.
“They’re pretty low. Couldn’t be much lower,” the Republican from Tennessee said outside the Senate chambers.
U.S. lawmakers said they wanted to prevent the president from acting unilaterally to lift penalties imposed by Trump’s predecessor, former President Barack Obama, for Russia’s meddling in last year’s U.S. election and for its aggression in Ukraine.
Negotiating Ability
White House officials had argued that it hampered the president’s ability to negotiate. In a separate statement announcing that he’d signed the bill, Trump asserted he had unique ability in that area.
“I built a truly great company worth many billions of dollars,” he said in the statement. “That is a big part of the reason I was elected. As president, I can make far better deals with foreign countries than Congress.”
The legislation cleared both the House and Senate by wide margins, indicating any presidential veto would be overridden. Signing statements aren’t a new phenomenon, but their use has increased in the modern era. Obama and George W. Bush used signing statements to express displeasure or signal planned modifications to legislation they felt compelled to sign over their own objections.
“This is an area, though, where the administration is going to be watched very carefully,” said Peter Feaver, a Duke University professor and director of the Triangle Institute for Security Studies, who served on the National Security Council staffs of Presidents Bill Clinton and Bush.
This sanctions bill, he said, was passed “by overwhelming majorities in both houses and it’s on one of the most important issues of the day. If the president tries to wiggle out from under the constraints of the law, I think he will pay a high political price for doing so.”
Feaver also said he expects Congress will replace this sanctions bill with one that returns more flexibility to Trump once the administration comes up with a clear and tough Russia policy.
“It’s driven by a perception on Capitol Hill that the administration does not have a coherent Russia policy yet and the administration has not yet spoken with one voice about what Russia did,” he said. “When they do, and it has bipartisan support, Congress will replace this form of sanctions with another one that gives the president a national security waiver or some form of more wiggle room that is more customary.”
— With assistance by Henry Meyer, Ilya Arkhipov, Terrence Dopp, and Stepan Kravchenko