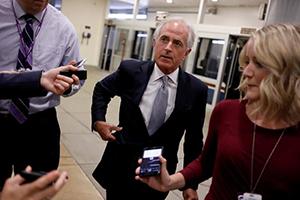 WASHINGTON (Reuters) – A U.S. Senate committee approved a bill on Thursday that would cut off $300 million in annual U.S. aid to the Palestinian Authority unless it stops making what lawmakers described as payments that reward violent crimes.

The Senate Foreign Relations Committee voted 17-4 for the measure, known as the Taylor Force Act, after a 29-year-old American military veteran who was fatally stabbed by a Palestinian while visiting Israel last year.

The bill, which must be approved by the full Senate and House of Representatives before becoming law, is intended to stop the Palestinian Authority from paying the stipends, which can reach $3,500 per month.

Force’s attacker was killed by Israeli police, but his killer’s family receives such a monthly payment.

“What has happened here will hopefully, when passed, prevent other people from having the same fate: an innocent person going about their activities in an innocent way, being murdered by someone who’s being incented to do that by their own government,” Senator Bob Corker, the committee’s Republican chairman and a co-sponsor of the bill, told a news conference.

Separately, 16 Republican and Democratic members of the committee wrote to Nikki Haley, the U.S. ambassador to the United Nations, to ask her to lead an international effort for similar action by other countries.

Force was a graduate student at Vanderbilt University in Corker’s home state, Tennessee, when he was killed.

Force’s parents live in South Carolina, the home state of Senator Lindsey Graham, the act’s other Republican co-sponsor. Graham, who dubbed the payments “pay to slay,” is chairman of the Senate subcommittee that oversees foreign aid.

Palestinian officials have said they intend to continue the payments, which they see as support for relatives of those imprisoned by Israel for fighting against occupation or who have died in connection with that cause.

To win broader support, the original act was modified to take into account the need for humanitarian aid. It exempts assistance for the East Jerusalem Hospital Network, creates an escrow account to hold assistance funds and spells out steps the Palestinian Authority can take for aid to resume.

Corker said he was confident the bill would become law sometime in the coming months. Similar legislation has also been introduced in the House of Representatives.

Opponents of the bill have said they worry that cutting off economic aid to the Palestinians would increase poverty and instability in the West Bank and Gaza, fueling more violence.