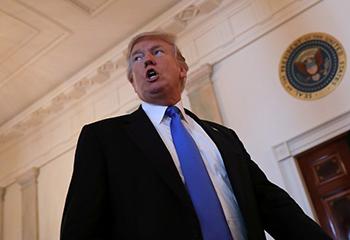 Washington: When Jorge Guajardo, one of Mexico’s most senior and seasoned foreign policy hands, got out of bed on Thursday morning, a couple of interesting messages were waiting on his mobile phone.

One was a link shared by a US diplomat to the leaked transcript of a phone conversation between US President Donald Trump and Mexican President Enrique Pena Nieto. In the second, a former Mexican official offered the quick analysis.

“He’s the opposite of Teddy Roosevelt,” that official quipped to Guajardo about Trump. “He speaks loudly and carries a small stick.”

Seven months into the Trump administration, the world’s diplomatic community has gone from throwing its hands in the air to now leaning back in their chairs and laughing, albeit morosely, at Trump’s cringe-worthy display of diplomacy during the infancy of his presidency.

A transcript of Trump’s conversation with Mexico’s leader was one of two phone calls uncovered by The Washington Post that provide yet another glimpse into the raw conversations that have opened Trump up to charges of hypocrisy and belittling his base.

Much of the conversation with Pena Nieto focused on Trump’s concession that he knew Mexico would never pay for a wall along the shared border. Trump’s promise that he would build a wall on the southern border and that Mexico would pay for it was a central theme of his presidential campaign. Indeed, these promises generated some of his loudest applause lines.

But, according to the transcript of the call, Trump pleaded with Pena Nieto to not say publicly that Mexico wouldn’t pay.

“Believe it or not, this is the least important thing that we are talking about,” Trump said, “but politically this might be the most important.”

Trump responds: “But you cannot say that to the press. The press is going to go with that and I cannot live with that.”

Trump doesn’t appear to recognise Pena Nieto’s political consequences if he were to bow to Trump’s tactics and not deliver a strong response.

“Everyone I’ve spoken to around the world is laughing,” Guajardo said.

The dramatic exchange brings new insight to German Chancellor Angela Merkel’s uncomfortable body language when speaking with Trump and French President Emmanuel Macron long handshake with the US president. These awkward moments are funny; indeed diplomats laugh privately at these displays. But it only serves to mask the serious concerns pulsing through the international community about the direction and priorities of the new administration.

Mexico is the third largest US trading partner and a crucial ally in a wide range of security, migration and trade issues. Because of the high stakes, former US and Mexican presidents worked hard to see past differences and find common interests.

Since Trump took over, diplomats from the two countries have had so many meetings trying to smooth over their leaders differences that other Latin American and European governments are looking to Mexico for advice on dealing with the Trump administration.

“I’m sure they were a lot more diplomatic and discreet in the way they described it,” said Michael Shifter, who as president of the Inter-American Dialogue has deep ties within the Mexican and American diplomatic communities. “But this clearly gives it the full flavour of what Mexico has been dealing with.”

As he read the transcript, Shifter thought of his Mexican friends.

“They’re totally bewildered,” he said. “That’s the reaction. It’s almost beyond the point of angry and insulted and more just what is this all about. How do we make sense of this?”

Guajardo said it’s fine to joke about it, but the reality is that people expect more from the United States and any leader with a “shred of dignity” is not going to allow themselves to be spoken to in that way.

Guajardo is from an opposing party of Pena Nieto, but says he feels bad for the leader and thinks his approval rating may improve because of the exchange.

The exchange will only make it harder for Mexico’s government to work with anyone in the United States who encouraged or tried to defend Trump’s behaviour.

Following the January conversation, Trump described it as a “very good” phone call and agreed to work to improve ties after a meeting was scrapped over funding Trump’s planned border wall.

“It is you and I against the world, Enrique,” Trump told the Mexican leader, according to the transcript. “Do not forget.”