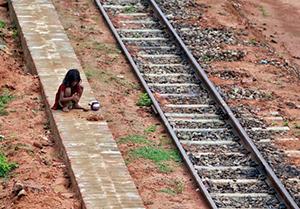 Andrew Griffin
Climate change could soon make it fatal to even go outside in some parts of the world, according to a new study.

Temperatures could soar so much in southern Asia by the end of the century that the amount of heat and humidity will be impossible to cope with and anyone going outside would die.
The study used new research that looked at the way humidity changes how people’s bodies can deal with heat. Temperatures and the amount of moisture will mean that the body will simply be unable to cool itself and so people will die, the researchers found.
The regions likely to be hardest hit include northern India, Bangladesh and southern Pakistan, home to 1.5 billion people.
The evidence is based on recent research showing the most deadly effects of hot weather come from a combination of high temperature and high humidity.
This is recorded using a measurement known as “wet-bulb” temperature, which reflects the ability of moisture to evaporate.
When wet-bulb temperatures reach 35C, the human body cannot cool itself enough to survive more than a few hours.
In today’s climate, wet-bulb temperatures have rarely gone above 31C anywhere on Earth. But in 2015, the limit was almost reached in the Persian Gulf region, during a year when heat killed an estimated 3,500 people in Pakistan and India.
The new research shows that without serious reductions in greenhouse gas emissions, extreme heatwaves could raise wet-bulb temperatures to between 31C and 34.2C.
“It brings us close to the threshold of survivability, and anything in the 30s is very severe,” said study author Dr Elfatih Eltahir, from Massachusetts Institute of Technology in the US.
By 2100, around 70 per cent of India’s population was expected to suffer occasional exposures to 32C wet-bulb temperatures, the researchers wrote in the journal Science Advances. And two per cent could be subjected to deadly heat at the 35C limit.
Dr Eltahir added: “With the disruption to the agricultural production, it doesn’t need to be the heatwave itself that kills people. Production will go down, so potentially everyone will suffer.”