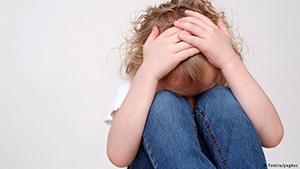 Politicians are considering giving physicians more leeway in sharing information about possible child abuse cases. The move might compromise rules of confidentiality – but it could also save lives.

Pediatrician Burkhard Lawrenz still remembers one of his hardest cases. He was treating two siblings who he believed were being abused. The mother realized Lawrenz was getting suspicious and stopped coming to his practice. Child Services were already involved and Lawrenz told them about his concerns.
“I assumed that the authorities would quickly take action after I told them, since they already knew about this family,” Lawrenz said. “But I was wrong.”
The mother killed both her children and then committed suicide.
Looking back, Lawrenz said that when the mother switched pediatricians, he should have turned to Riskid and alerted his colleagues about the abused children.
Riskid is an online network founded in Duisburg in 2005. When a doctor has a sneaking suspicion that a child is being abused, he or she can enter the child into the Riskid database and see if another pediatrician has had similar concerns. If that’s the case, the doctor can either call the colleague in question and discuss the details or enter the child’s details into the network.
This is to prevent what’s being called doctor-hopping, which is what happened in Lawrenz’s case.
“In a few cases you see the abuse crystal-clear, but usually you’re not really sure in the beginning and only start to realize something is wrong once you’ve seen the children a couple of times,” Lawrenz told DW. “If parents switch to a new doctor during this critical period, it takes longer and longer for someone to really catch on to what is happening.”
Speeding up this process could spare children a lot of suffering – and might even save lives.
But the roughly 270 doctors who participate in the Riskid network are acting in a legal grey zone. Generally, doctor-patient confidentiality dictates that a physician cannot share any information about his patients unless they explicitly agree to it.
To make the doctors’ legal situation clearer, the newly elected government in the state of North Rhine-Westphalia plans to look into changing the law.
“Violence against children is an absolute no-go. It’s the responsibility of the state and society to protect the smallest and weakest,” state Health Minister Karl-Josef Laumann (CDU) told DW via email. “Doctors clearly need more security and support. That’s why we’re checking which measures and instruments make sense to aid doctors in effectively protecting children.”

Asking the abusers for approval
Consulting with colleagues about a case to avoid making mistakes is generally allowed, but difficult when it comes to cases of suspected child abuse, Riskid founder and pediatrician Ralf Kownatzki told DW.
“If you have a broken arm and go to the hospital, the lab technician will talk to the surgeon who will talk to the radiologist and so on,” Kownatzki said. “It’s actually stipulated in the code of medical ethics that doctors have to consult other physicians to make sure things run smoothly. But it’s different with diagnosing child abuse. According to current law, doctors have to get the ok from the parents – the abusers in many cases – to consult with their colleagues in the way I just described.”
That’s why pediatricians in the Riskid network have taken to asking all parents that step into their practice first thing whether it’s ok for them to consult with other doctors if need be. But it’s still a fine line to tread.
“I know many colleagues are hesitant to join the network because they’re worried about confidentiality,” Kownatzki said. “We’d be happy if the state government could clarify the legal situation, so that doctors could exchange indications and diagnoses of child abuse just like they do for other diseases, from appendicitis to heart attack.”
Parents would benefit
The physicians involved with Riskid have support from politicians not just in the state government of North Rhine-Westphalia, but also on a national level. Bärbel Bas is a representative for the Social Democrats in the Bundestag, Germany’s parliament. She’s from Duisburg, where Riskid was founded, and believes the project is of crucial importance in helping doctors make the right diagnosis and take appropriate next steps.
She would like to see the exchange between doctors about possible abuse cases legalized nationwide, because, as she points out, guilty parents can move from state to state to avoid detection.
“Family-policy makers are worried that allowing such an exchange would take away parents’ rights,” Bas told DW. “But it’s actually good for parents if doctors are allowed to talk to each other and can find out this way that a certain child has not been abused – false accusations could be avoided more easily.”
‘Pay attention!’
How, when and even whether the law will be changed at all is unclear. But even improved regulations wouldn’t do any good without attentive doctors.
Says pediatrician Lawrenz: “The most important thing [for doctors] is to pay attention and keep your eyes and ears open when treating kids.”