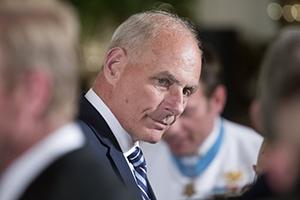 By Leon E. Panetta – The Washington Post
Leon E. Panetta was White House chief of staff from 1994 to 1997 and served as CIA director and secretary of defense in the Obama administration.

Retired Gen. John F. Kelly has survived combat. The question now is whether he can survive as White House chief of staff.
The answer will be determined in part by challenges faced by every chief of staff, but most importantly by the personal relationship Kelly has with his boss — the president of the United States.
When I became White House chief of staff in 1994, President Bill Clinton was concerned about some of the same difficulties confronting this president — too little discipline, competing centers of power, a weak chain of command, haphazard access to the Oval Office, leaks and a lack of focus on a unified message or priorities. The key, however, was that Clinton recognized these problems and wanted to correct them for the sake of the country and his presidency.
The elements critical to improving White House operations are pretty basic:
1. Trust. There has to be trust between the chief of staff and the president. Each must be honest with the other and be willing to back the other up on personnel and policy decisions.
2. One chief. If there are too many assistants to the president who have no clear portfolio of responsibility but who can go around the chief of staff to the president, that is a prescription for chaos. For the chief to be successful, he must control all staff, know what each person is responsible for and working on, and be fully aware of all policy discussions taking place with the president. That is not to say that staff members should not be free to present their views to the president, only that this should be done pursuant to a process that has been established by the chief of staff and approved by the president.
3. A clear chain of command. Every staff member needs supervision, and that means having clear lines of authority. I put two deputies in place, one responsible for issues and politics, the other for scheduling and personnel. They, in turn, supervised certain employees to ensure that each was doing the job assigned. It is important that staff members feel that they are part of a team serving the president and that they are kept informed about the key messages, issues and priorities of the president. If a chief does this right, it will go a long way toward controlling leaks.
4. An orderly policy-development process. It is critical that there be a system for providing the president with the essential information and options required to make decisions on key issues. The National Security Council has a long-established process of meetings for deputies and principals designed to provide recommendations on critical foreign policy crises. The same should be true on economic and domestic issues. It may be difficult to stop this president from tweeting, but at a minimum he needs to tweet based on a policy process managed by the chief of staff.
5. Telling the president the truth. There has to be one person in the White House willing to look the president in the eye and tell him the truth — to tell him when he is wrong and when he is about to make a mistake — and that has to be the chief of staff. Staff members, by their nature, are hesitant to challenge the president for fear of offending him. But it is a disservice to the president and the nation not to make him aware of the political and substantive problems he may confront as a result of a particular decision. No president likes to be told he is wrong. However, to be successful, all presidents have to accept the reality that they are not always right.
Every chief of staff, past and present, has faced these challenges. But success or failure is not just dependent on the chief of staff; it also hinges on the willingness and support of the president. Clinton was willing to make the changes necessary to establish effective White House operations, and he was reelected in 1996. Whether President Trump is willing to make these changes will in large measure determine not just how long Kelly survives as chief of staff, but also the ultimate success or failure of Trump’s administration.