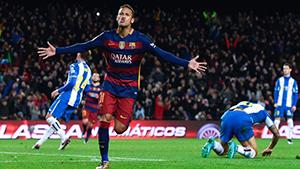 Paris St Germain have announced the signing of Neymar for a world-record fee on a five-year contract.

The 25-year-old Brazil forward, whose legal representatives on Thursday paid Barcelona the world-record fee to terminate the contract which tied him to the Catalan giants, has signed a five-year deal with the Ligue 1 club.

PSG announced Neymar’s arrival on their website just hours after Barcelona acknowledged the receipt of 222 million euros (£200.6million), preceding the move’s confirmation with a video posted on Twitter that teased: “He’s coming.”

Sky Bet have priced Neymar up at 20/1 to finish this season as the Champions League’s top goalscorer and he’s 66/1 to net against Barcelona in the final of the competition.

Neymar is available at 9/1 to score 30 or more goals in France’s Ligue 1 this term and he’s 7/2 to finish the season at the head of the division’s top scorer list.

PSG are the odds-on favourites at 1/7 with the online bookmaker to land the Ligue 1 title and Champions League success for the French giants is on offer at 9/1.

“Since I arrived in Europe, the club has always been one of the most competitive and most ambitious. And the biggest challenge, what most motivated me to join my new teammates is to help the club to conquer the titles that their fans want.

“Paris Saint-Germain’s ambition attracted me to the club, along with the passion and the energy this brings. I played four seasons in Europe and I feel ready to take the challenge.

“From today, I will do everything I can to help my new team-mates, to open up new horizons for my club and to bring happiness to its millions of supporters around the world.”

Sky Bet are also looking ahead to how Barcelona will spend their massive windfall, with odds offered on the club’s next signing. Borussia Dortmund star Ousmane Dembele heads the betting at 11/8, with Inigo Martinez and Liverpool playmaker Philippe Coutinho next in line at 5/2 apiece.

Barcelona have passed the details of the deal to UEFA. The fee obliterates the previous record of 105m euros – worth £89m at the time – that Manchester United paid Juventus for Paul Pogba last summer.

The Catalan club are keen for the governing body to “determine the disciplinary responsibilities that may arise from this case” with issues of Financial Fair Play and adherence to European transfer rules in mind.

Earlier in the day Neymar’s lawyers were sent to LaLiga headquarters in Madrid to pay the huge fee, only to be snubbed.

France’s own league body the Ligue de Football Professionnel (LFP) was quick to tell its Spanish counterpart to “abide by the rules”, yet Neymar’s team instead went to Barcelona directly to conclude the operation.

Neymar had indicated his desire to depart Barcelona, for whom he scored more than 100 goals, on Wednesday.

At the Nou Camp he formed the fabled ‘MSN’ strike partnership along with Lionel Messi and Luis Suarez that delivered a treble of league, cup and Champions League in the 2014-15 season.
Neymar
Neymar

Neymar was the driving force behind Barcelona’s remarkable comeback against PSG in the European quarter-finals last season. He scored twice and set up the winner as the Catalans won 6-1 to overturn a 4-0 first-leg deficit.

The Parisians’ president Nasser Al-Khelaifi, the Qatari businessman who led the acquisition of the Ligue 1 outfit in 2011, was delighted to get his man.

“It is with immense joy and pride that we welcome Neymar to PSG,” he said.

“Neymar is today one of the very best players in world football. His winning mentality, strength of character and sense of leadership have made him into a great player.

“He will bring a very positive energy to this club. In six years, we have built a very ambitious project that has already taken us to the highest level of national and European football.

“Today, with the arrival of Neymar, I am convinced that we will come even closer, with the support of our faithful fans, to realising our greatest dreams.”

3 – Third remains his best FIFA Ballon d’Or placing, when he came in behind Lionel Messi and Cristiano Ronaldo for the 2015 award.

1 – Champions League trophy won after Barcelona beat Juventus in the final in 2015.