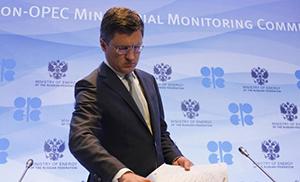 Henning Gloystein | Reuters
SINGAPORE: Oil markets dipped on Friday, with US crude remaining below $50 per barrel, restrained by rising output from the United States as well as producer club OPEC.

US West Texas Intermediate (WTI) crude futures were at $48.93 per barrel at 0345 GMT, down 10 cents, or 0.2 percent, from their last close and around 90 cents for the week.
Brent crude futures, the international benchmark for oil prices, were at $51.90 a barrel, down 11 cents, or 0.2 percent, from their last close and around 70 cents for the week.
Traders said prices were being pulled down by rising output, although strong demand prevented bigger drops.
“Developments this week have seen some pessimism return to markets,” National Australia Bank said in its August outlook.
“We forecast Brent to trade at around $53 per barrel in Q4 2017,” it said.
Crude oil exports by the Organization of the Petroleum Exporting Countries (OPEC) rose to a record high in July, driven largely by soaring exports from the group’s African members, according to a report by Thomson Reuters Oil Research this week.
July’s 26.11 million barrels per day (bpd) in exports marked a rise of 370,000 bpd, most of which came from Nigeria, which posted a rise of 260,000 bpd in shipments.
In the United States, oil production has hit 9.43 million bpd, the highest since August 2015 and up 12 percent from its most recent low in June last year.
“Quarterly reporting season has seen a swathe of (US) shale producers announce aggressive production targets, despite weak prices as they cut costs and become more efficient,” ANZ bank said on Friday.
Strong demand is still preventing prices from falling.
US gasoline demand rose to 9.842 million bpd last week, the highest since the US Energy Information Administration began collecting the data in 1991, the federal agency reported this week.