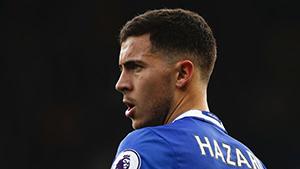 Neymar has gone but Eden Hazard wants a move to Barcelona, according to one report in Friday’s Paper Talk.

Mauricio Pochettino’s side are also set to step up their interest in Schalke star Max Meyer.

Bournemouth have had an offer worth £20million for England Under-21 winger Demarai Gray rejected by Leicester.

Liverpool manager Jurgen Klopp expects a backlash from some players after warning they may not be regulars.

Chelsea are to be hit with legal action by Diego Costa’s lawyer over Antonio Conte’s handling of the outcast striker as he pushes for Atletico Madrid transfer.
THE SUN

Jeremain Lens is primed to move to Besiktas as relegated Sunderland look to free up some cash.

Diego Costa will hand in a transfer request in a bid to force a move back to Atletico Madrid.
THE GUARDIAN

Neymar pledges to ‘conquer the titles’ for Paris Saint-Germain after his world record £198m move from Barcelona.
DAILY TELEGRAPH

Mauricio Pellegrino will attempt to personally broker a compromise between the Southampton board and Virgil van Dijk.

West Brom boss Tony Pulis fears he will have to wait for the Premier League’s big hitters to finish their business before he can press home his transfer plans.

Eden Hazard has told Barcelona he will join them from Chelsea this summer and snub Real Madrid in the process.
DAILY EXPRESS

Jose Mourinho has reportedly blamed Manchester United’s lack of urgency in the transfer window on their failure to get a deal done for Ivan Perisic.

Roma are reportedly planning a move for Manchester United playmaker Juan Mata if they fail to sign top transfer target Riyad Mahrez, according to reports from Italy.