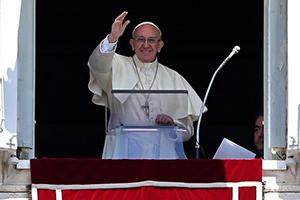 BEIJING (Reuters) – Pope Francis “loves China” and the Vatican hopes China has a great future, a Chinese state-run newspaper on Friday cited a visiting Vatican official as saying, in an expression of goodwill despite strained relations between the two.

Pope Francis would like to heal a decades-old rift with China, where Catholics are divided between those loyal to him and those who belong to a government-controlled official church.

In June, China said it opposed outside interference in its internal affairs after the Vatican expressed concern about a Chinese bishop it said had been “removed”.

Speaking in Beijing where he was attending an organ transplant conference, the head of the Vatican’s Pontifical Academy of Sciences, Monsignor Marcelo Sanchez Sorondo, expressed the Pope’s goodwill, the state-run Global Times reported.

“Pope Francis loves China and loves the people of China, its history and population. We hope China can have a great future,” the paper quoted him as saying.

In February, China’s Foreign Ministry downplayed the significance of a top health official’s attendance at a Vatican conference on organ trafficking, saying it probably had nothing to do with two-way ties.

One obstacle to better relations is the question of who should make senior clerical appointments in China.

China says bishops must be named by the Chinese Catholic community and refuses to accept the authority of the pope, whom it sees as the head of a foreign state that has no right to meddle in China’s affairs.

The two sides have been at loggerheads since the expulsion of foreign missionaries from China after the Communists took power in 1949.

Another source of friction is the Vatican’s maintenance of official ties with self-ruled Taiwan, which Beijing sees as a wayward province to be taken back by force if necessary.