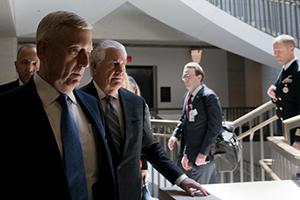 By THE EDITORIAL BOARD – The New York Times
The State Department press briefing room has traditionally been the place where the United States government has explained and promoted its foreign policy to the world. In six months as secretary of state, Rex Tillerson did not set foot there — until Tuesday, when he popped in to deliver a double-barreled message to North Korea about its rapidly expanding nuclear weapons and missile programs.

First, he asserted, the Trump administration is not seeking regime change in the North. It is, instead, seeking a “productive dialogue.” His comments, as surprising as his appearance, represented a sharp departure from the threats and harsh language that have dominated President Trump’s approach — and for a brief moment indicated a possibly productive shift from the tough-guy message that puts the onus on China to bring North Korea in line to a more nuanced, multidimensional approach to a grave and gathering nuclear threat.
But this, we have to keep reminding ourselves, is the Trump administration, and it wasn’t long before any confidence that Mr. Tillerson was speaking for the president, or that the national security team had agreed on a common strategy that included a diplomatic opening, was called into doubt. Flying to Washington from Europe on Wednesday, Vice President Mike Pence rejected the idea of talks with the North Koreans, saying that “engaging North Korea directly” was not presently in the cards.
Managing security challenges requires layered approaches, and it’s not unusual for senior officials to emphasize different aspects of any given strategy. But the question now is whether there is any strategy at all. Severely understaffed in senior security posts, where expertise is usually found, and relying instead on officials with little governing experience, like Mr. Trump, this administration has struggled to articulate a coherent policy toward the North. Not just ordinary Americans, but America’s allies, have had a hard time understanding where this administration is headed. One can only assume that the North Koreans, isolated from much of the world, are no less confused, greatly raising the risk of misunderstanding and miscalculation.
None of this is to excuse North Korea, whose 21 or so nuclear weapons and aggressive behavior pose a growing menace. And while North Korea has hinted at an interest in talking to the United States — which it views as a threat and is one reason it thinks it needs a nuclear arsenal in the first place — it is not clear if the overtures are serious or a feint to buy time so the North can continue to perfect an intercontinental ballistic missile that could hit the United States.
If there is a plausible way to peacefully address the problem — and there are reasons to question whether that is even possible at this advanced stage — it will not involve bluster like Mr. Pence’s. It will have to involve a nuanced combination of pressure — the threat of tougher sanctions, for instance — plus a willingness to address North Korea’s fears, not least its fear that the United States and South Korea are together determined to destroy it.
The best solution is TWO Koreas. Sign a peace treaty.A seven or eight nation peace deal with major regional powers:1. NK give up nuclear…
So what did Mr. Tillerson put on the table? He reassured the North not only that the United States doesn’t seek regime change, but also that it doesn’t seek accelerated reunification of the peninsula or “an excuse to send our military north of the 38th parallel,” thus putting himself at odds with Mike Pompeo, the C.I.A. director, who has hinted that he wants to see the North Korean government fall.
Mr. Tillerson insisted, as previous administrations have, that the North must agree to abandon its nuclear weapons before talks are held. That seems like a nonstarter, since no government would surrender its only bargaining chip like that. But administration officials have said privately that this does not mean the North Koreans must surrender the weapons, but, as one official said, “take good-faith steps to demonstrate their commitment to denuclearization” in the future, steps that have been explained to officials in the North, through their United Nations mission in New York.
Right now, there is a stalemate, set by years of broken promises and mistrust. Mixed messages from the Trump administration will only make it more difficult to move beyond it.