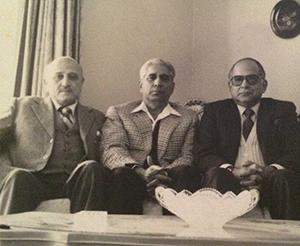 Seventy years ago, in August 1947, British colonial rule in India came to an end. The country was divided into two independent states – Hindu-majority India and Muslim-majority Pakistan. Using letters and diaries sourced from the world’s first Partition Museum which opens in Amritsar on 17 August, Soutik Biswas pieces together the extraordinary story of four friends who were separated by the traumatic event and reunited 30 years later.

“Our country has been broken; the great, sound pulsating heart of India has been broken,” a young man in Lahore, Pakistan, wrote to his best friend in Delhi, the capital of India, in the summer of 1949.
Writing in elegant cursive and turquoise blue ink, Asaf Khwaja had poured his heart out to Amar Kapur. Barely two years had passed since they had been separated by the bloody partition which split the subcontinent into the new independent nations of India and Pakistan.
“We in Lahore, your friends and former playmates, those who were in school with you and in college and whose first 25 years of life, are inseparably linked with those of yours assure you with the utmost sincerity that distance has not made the slightest difference in our love and affection for you; that we remember you, and remembered you often, with the same brotherly feeling that for so long characterised our relations,” wrote Asaf, who had just joined the Pakistan Times newspaper as a journalist.
“We have spent good times, Amar, grand times, together.”
Amar Kapur, Asaf Khwaja, Agha Raza and Rishad Haider were like a brotherhood of friends.
They lived within a three-mile radius, visited each other’s homes, shared street snacks on the way home from convent school, studied in the same college and played soft ball cricket with twigs for stumps. From innocent boyhood to callow youth, they had shared the good times.
Then, in the tumultuous summer of 1947, hard times arrived with a vengeance.
Amar’s separation had hurt the most. He was the only Hindu in the group, and his friends called him Punditji, which means a Hindu priest.
Three weeks after the partition in August 1947, Amar and his family abandoned their sprawling family home and 57-year-old printing business in Lahore, and joined the millions of refugees that crossed the border in what was one of the greatest migrations in human history.
Two years later, in Delhi, they were still trying to salvage their lives from the detritus of partition.
Back in their severed homeland, Asaf, Agha and Rishad had entered adulthood and were starting to earn a living.
Asaf’s mordant wit was on magnificent display as he shared the news about their friends.
“Agha and Rishad have entered into business – the swindlers. They are running an agency for Burmah Shell Company and minting a good bit of money. I wish you could see [Agha] Ahmad. He is (sic) grown so fat and bald that you would find it hard to recognise him – signs of prosperity!” Asaf wrote.
Asaf was a pragmatic idealist. He loved cricket, poetry and the mountains and developed a love for contract bridge in his later life. He would sometimes spend his summers with his grandfather on a houseboat on Kashmir’s Dal Lake or visit the unspoilt mountains of Swat. He was also hopeful about a brighter future for both nations.

Partition of India in August 1947
• Perhaps the biggest movement of people in history, outside war and famine.
• Two newly-independent states were created – India and Pakistan.
• About 12 million people became refugees. Between half a million and a million people were killed in religious violence.
• Tens of thousands of women were abducted.
• This article is part of a BBC series looking at Partition 70 years on.