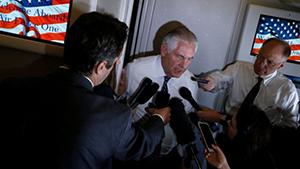 By Barbara Plett Usher- BBC News, State Department Correspondent
As the Trump administration careened past its first six months in office the swirl of speculation about an imminent “Rexit” prompted the Secretary of State to publicly deny that he was about to quit.