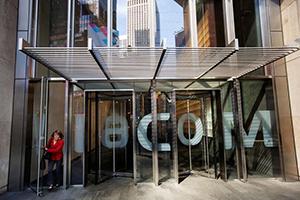 The media company beat Wall Street’s average estimates for fiscal third-quarter revenue and profit, helped by an unexpectedly strong 4 percent jump in such affiliate sales, but investors focused on the downbeat projection for the current quarter.

“As good as the affiliate fee number was in this quarter, it looks really bad in the next quarter,” said Brian Wieser, an analyst at Pivotal Research Group. “You won’t be able to see investors having overly aggressive expectations after this call.”

Shares of Viacom, controlled by mogul Sumner Redstone and his daughter Shari, fell 7.7 percent to $32.37 in after-hours trading.

For the latest quarter, Viacom said U.S. sales to pay-TV affiliates and online video firms such as Netflix Inc, which pay to screen its shows, rose 4 percent to $1.01 billion, largely due to the timing of some deals with streaming video services.

On a post-earnings conference call executives said that bump would not be repeated this quarter, and instead said they expected affiliate revenue to dip.

The meager outlook comes as U.S. television networks and cable providers are struggling to keep hold of viewers as more watch shows and movies on smartphones and tablets. Six of the largest U.S. pay TV providers posted subscriber losses during the past quarter.

As a result, investors are worried that companies like Viacom will not be able to negotiate rate increases from their pay-TV partners.
AFFILIATE SALES WORRY

Concerns about such a knock-on effect on Viacom of the decline in traditional cable TV subscriptions deepened last quarter, when Charter Communications Inc moved five of its flagship networks to its most expensive programming tier, a move that will likely result in lower affiliate revenue for Viacom.

Viacom Chief Executive Bob Bakish said on the conference call he does not expect to resolve the issue with Charter until the two reach a new deal. “This could take a little time,” he added.

Bakish took over the helm at Viacom last year and is attempting to turn around the company’s fortunes by focusing on six of its brands – Paramount, BET, Comedy Central, MTV, Nickelodeon and Nick Jr.

As part of its plans, Viacom last month tried to buy Scripps Networks Interactive, home of lifestyle networks such as Food Network, HGTV and the Travel Channel, but was outbid by Discovery Communications Inc, which announced on Monday it is buying Scripps for $11.9 billion.

Bakish said on Thursday Viacom is open to mergers and acquisitions, but the “overwhelming focus is on organic execution.”
ADS DIP AGAIN

Viacom’s domestic advertising revenue fell 2 percent in the latest quarter, in line with analysts’ expectations, according to FactSet.

The company said it expects another low single-digit decline in the current quarter, which it largely attributes to the company’s strategy of cutting ad loads, or how long commercials run during its shows.

Excluding some items, the company earned $1.17 per share. Analysts on average had expected to earn $1.05 share, according to Thomson Reuters I/B/E/S.

Aside from falling affiliate and ad sales, Viacom investors also fretted on Thursday about a snag in the company’s Chinese movie financing deal, which executives disclosed on the call, noting that Chinese studio Huahua Media delayed a payment to the company in June.

In January, Viacom announced a $1 billion cash investment from Shanghai Film Group and Huahua Media, giving the U.S. studio much-needed cash and support as it attempts to grow.

Despite the delay, Viacom Chief Financial Officer Wade Davis said “everything is on track” with the movie-financing deal.

Reporting by Aishwarya Venugopal in Bengaluru and Jessica Toonkel in New York; Editing by Maju Samuel and Bill Rigby