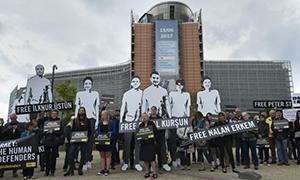 By TM
The İstanbul 11th Penal Court of Peace on Friday rejected an objection to the arrest of eight human rights defenders who were put in pretrial detention by an İstanbul court on July 18 after being detained during a workshop on İstanbul’s Büyükada.

The court ruled for the continuation of the pretrial detention of the human rights defenders, including Amnesty International (AI) Turkey Director İdil Eser, claiming that the evidence was adequate for the continuation of the arrests.
Turkey’s arrest of human rights activists received much criticism from European Union countries, further endangering Turkey’s membership accession and weakening its ties with Europe.
Turkish President Recep Tayyip Erdoğan accused the human rights defenders of plotting a follow-up to a July 15, 2016 coup attempt, during a press conference on July 8.
Taner Kılıç, a lawyer and chairman of AI’s Turkey’s board, was arrested on June 9, accused of links to the alleged mastermind of the failed coup attempt on July 15, 2016, Fethullah Gülen, who has denied any involvement.