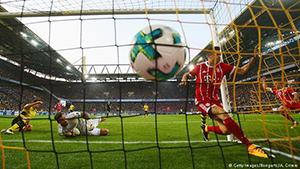 Goals from Christian Pulisic and Pierre-Emerick Aubameyang appeared to put Borussia Dortmund on course for victory in the German Super Cup. But but a late own goal forced a shootout, with Bayern coming out as winners.

Borussia Dortmund 2-2 Bayern Munich (Bayern won 5-4 on pens)
Pulisic 12′, Aubameyang 71′ – Lewandowski 18′, Bürki og 88′
Marc Bartra missed the crucial spot-kick as Bayern Munich won the first silverware of the new season with victory over rivals Borussia Dortmund at Signal Iduna Park.
With Dortmund looking on course for victory after Pierre-Emerick Aubameyang’s second half strike, Bayern were only able to force penalties with a scrappy own goal two minutes from time – but it was enough to keep Bayern in the contest
On a night when several big names were missing for both sides – Marco Reus and Julian Weigl for Dortmund, James Rodriguez and David Alaba for Bayern, among others – Dortmund’s impressive young forward line dazzled in front of new coach Peter Bosz, but the former Ajax trainer will have to work hard to instill a winning mentality among his team, whose narrow defeat is a further reminder that they remain firmly in the shadows of the champions.
The penalty miss was tough on Bartra, who has endured a difficult year at Dortmund and produced a fine performance at the heart of the defense. Sebastian Rode missed too as Dortmund slumped to a third successive Super Cup defeat to Bayern.
The game was an absorbing contest that ebbed and flowed throughout an exhilarating first half. Moments after former Dortmund favorite Robert Lewandowski fired an early warning sign, rifling a shot into the Südtribune after Thomas Müller had hoisted a ball over the Dortmund defence, Dortmund struck the opener.
A loose pass by Arturo Vidal put Javi Martinez under pressure and Christian Pulisic picked the Spainiard’s pocket, drove towards goal and slid the ball under Sven Ulreich with a calm assurance.
Bayern were soon level though. New signing from Hoffenheim, Sebastian Rudy, spotted the run of Joshua Kimmich down the right flank, and his low cross was swept in from close range by Lewandowski to square the score.
Franck Ribery, 34-years-old and still turning defenders inside out, created a great chance for Bayern to sneak ahead when his mesmeric dribble and pass found Müller, whose first time shot was saved superbly by Roman Bürki.
In a first half of plenty of chances, Müller went closer still when he connected with Kimmich’s clipped cross in from right, but could only find the base of the post with his header.
Bosz and Carlo Ancelotti no doubt addressed their sides’ slack defending at the break and things tightened up in the second half, with fewer clear cut chances after the restart.
Dortmund eventually made the breakthrough with 19 minutes to play. Dembele slipped Aubameyang through with a fine pass and, despite a heavy first touch, the Gabonese striker kept his cool to prod the ball over Ulreich and into the top corner.
That had seemed enough to clinch a morale-boosting victory for Dortmund ahead of the new campaign, but Bayern struck with a scruffy late goal to force the shootout. A corner wasn’t dealt with by Dortmund and despite the best efforts of Bartra on the line, Kimmich scrambled the ball in via a couple of deflections, with goalkeeper Bürki getting the final touch.
Having lost three successive Super Cups between 2013 and 2015, Bayern have now won two in a row. Now their attention turns to winning a record sixth successive Bundesliga crown.