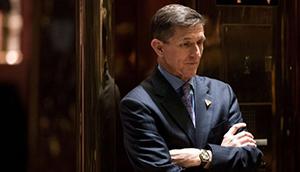 By TM
Prosecutors working under special counsel Robert Mueller are currently investigating whether former national security advisor Michael Flynn was secretly paid by the Turkish government in the final months of the US presidential campaign last year, The New York Times reported on Friday.

According to potential witnesses, prosecutors and FBI agents have been scrutinizing the details of Flynn’s dealings with Turkish-American businessman Ekim Alptekin, who worked last year with Flynn and his consulting business, the Flynn Intel Group.
Flynn’s company was paid $530,000 by Inovo BV, registered in the Netherlands and owned by Alptekin, to discredit Turkish Islamic cleric Fethullah Gülen, who lives in self-imposed exile in Pennsylvania and who is accused by the Turkish government of masterminding a failed coup in Turkey last year.
Investigators are trying to determine if the Turkish government was behind that payment and whether the Flynn Intel Group made kickbacks to Alptekin for helping to conceal the source of the money.
According to the Times, taking money from Turkey is not illegal, but failing to register as a foreign agent is a felony and trying to hide the source of the funds by routing it through a private company and then paying kickbacks to the middleman could lead to criminal charges, including fraud.
Flynn retroactively registered as a foreign agent with the US Justice Department in March, after he had been forced out of his job as national security advisor for the Trump administration for misleading Vice President Mike Pence about contacts he had with the Russian ambassador to the United States.
Out of a $600,000 contract with Inovo, Flynn Intel was paid only $530,000 for some research conducted and a “comically inept attempt” to make an anti-Gülen video that was never completed. The entire enterprise would probably have gone unnoticed if Flynn hadn’t written an opinion piece published on Nov. 8 by The Hill titled “Our ally Turkey is in crisis and needs our support,” urging improved Turkish-US relations and denigrating cleric Gülen.
The op-ed led to the Justice Department looking into Flynn’s relationship with Alptekin, with special emphasis on two payments of $40,000 each made by Flynn Intel to Inovo, which appeared to be kickbacks due to their suspicious timing, just days after payouts to Flynn’s group from Alptekin’s company.
Alptekin claimed that the payments were refunds for work not performed by Flynn rather than kickbacks for acting as a front for the Turkish government.
Investigators are also questioning why Alptekin hired Flynn in the first place. In March he told a reporter for Al-Monitor that Flynn had been hired “to produce geopolitical analysis on Turkey and the region” for an Israeli energy company, but in June he told the Times that he wanted a credible American firm to help discredit Gülen, accused by the Turkish government and President Recep Tayyip Erdoğan of mounting the failed coup last year.
Turkey has unsuccessfully been pursuing Gülen’s extradition from the US.
Alptekin, chairman of the Turkey-US Business Council, is known to be a strong supporter of Erdoğan.