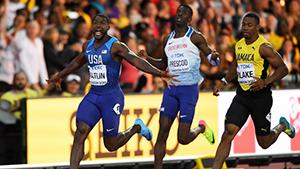 20/1 shot Justin Gatlin stunned Usain Bolt to claim 100m gold at the World Athletics Championships in London.
Bolt was slow out of the blocks and was always struggling to overhaul his rivals.

Christian Coleman, the fastest man in the world this year, got the best start but he was hauled back by Gatlin, who has served two drugs bans in his career.
The American, 20/1 with Sky Bet prior to the final, won in 9.92 seconds. Coleman (9.94) held on for silver with Bolt (9.95) only able to take bronze on the final individual run of his career.
He will retire after next weekend’s 4x100m relay in which he will attempt to claim a 20th global sprinting gold medal.
This was his first bronze, however, as the hot favourite was overturned by the villain of the piece – Gatlin was booed as the result was confirmed over the public-address system.
Briton Reece Prescod, a surprise finalist, finished seventh in 10.17.
Bolt was aiming to claim a fourth 100m world title after victories in Berlin, Moscow and Beijing, but had another shocking start. He had endured poor starts in his heat and semi-final – fiercely criticising the blocks after Friday night’s heat.
The IAAF had dismissed his complaints, insisting the blocks are the same model as used as in Beijing two years ago.
He recovered in the second half of the race again but could not bring in Gatlin or Coleman.
WCH 2017 London – Usain Bolt JAM 100 Metres Bronze
Bolt said: “No regrets. I came out and did my best, I was always to end no matter what happened – win, lose or draw I was always going to walk away.
“It doesn’t change anything in my career, I have done everything I can do for the sport and for myself. It’s time to go.
“It doesn’t change anything. I lost the race to a great competitor, I came third to a young kid coming up – he has a great talent and a great future ahead of him.
“No matter what happened this season I was going to come out and do my best. I did it for the fans, they really wanted me to do one more season.
“I worked hard, I’m definitely disappointed. No one is going to be happy they didn’t win but I knew I came out here and I gave my all.”
Speaking about his bad start, the 30-year-old added: “That was the only thing, after the semi-finals, I ran the semi-finals with Coleman, and I knew if i didn’t get my start I was going to be in trouble.
“That’s it, I knew it. When I left he blocks I was like ‘ahhh’. I knew I had to try so I came out and tried my best but it wasn’t good enough.
“I don’t know what to say about my start, this is the first time in a championships I’ve gone thorough and it’s been so poor. I was going through the mixed zone and looked at the start and my reaction was 0.183.
“It shows I was way off. I knew from the start if I didn’t get in to race I would be in trouble. I try not to blame one thing. I came out and gave it my best and it wasn’t good enough.”
The result was not immediately clear, with the crowd waiting to see the scoreboard, but when it showed the standings it left the London Stadium in stunned silence before they began to chant Bolt’s name as Gatlin celebrated and was in tears on the track.
Gatlin’s celebrations were a sideshow as Bolt still took the plaudits and did a lap of honour, still playing to the crowd when the stadium was emptying.
The American was the pantomime villain throughout the competition, having previously been banned for doping violations in 2001 and 2006.
Bolt added: “For me, over the years, he has done his time, if he’s here then it’s okay. I will always respect him as a competitor.
“Over the years he has worked hard and he is one of the best I have competed with. I know if I don’t show up he’s always going to win and he showed up.
“He deserves to be here because he’s done his time and he’s worked hard to get back to being one of the best athletes.
“He is a great competitor. I’ve always said that about Justin Gatlin. You have to be at your best and I wasn’t and that’s what I respect about him because he competes and I really appreciate competing with him.
“He’s an excellent person, as far as I’m concerned. He’s good at it and just a good person.”
Gatlin, the 2004 100m Olympic champion, insisted he blocked out the jeers and thanked Bolt.
“I didn’t really focus on the booing,” he said.
“I just stayed focused on what I had to do. I guess I’ve become more of a rival for Usain, I guess that’s where the booing’s come from.”