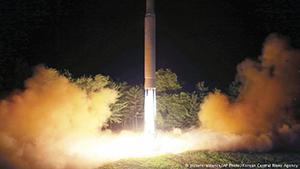 N. Korea’s neighbors and the US have stepped up pressure on Pyongyang following the passing of a US-drafted resolution for new sanctions. The measures approved by the UN are the toughest sanctions on North Korea to date.

China’s Foreign Minister Wang Yi said on Sunday that the latest sanctions passed by the United Nations Security Council were “necessary” after North Korea’s missile tests in July, but he noted that they were “not the ultimate purpose.”
“Our purpose is to bring all parties involved in the nuclear issues back to the negotiating table, finding the resolutions through talks to realize the denuclearization of the Korean Peninsula,” Wang told reporters on the sidelines of ASEAN meetings in Manila.
“We cannot do one and neglect the other. Sanctions are needed but sanctions are not the final goal,” he said.
Wang also met with his North Korean counterpart Ri Yong Ho on the sidelines of the ASEAN meetings, saying that he urged Ri to abide by the UN resolutions.
Susan Thornton, a top US diplomat for Asia, said that the US will be watching Beijing closely to make sure it implements the latest UN sanctions, but she noted that China’s vote shows that it understands the gravity of the problem.
Both South Korea and the US praised the tougher UN sanctions during their meetings, with US Secretary of State Rex Tillerson describing it as “a good outcome.”
The situation in North Korea is likely to dominate Monday’s ASEAN Regional Forum (ARF), where 27 foreign ministers – including those from North and South Korea, China, Japan, Russia and the US – will meet to discuss security issues in the region.
Toughest sanctions yet
The UN Security Council on Saturday tightened sanctions on North Korea, unanimously voting through a US-drafted resolution that could slash the Asian state’s export revenue by a third.
The resolution bans North Korea from exporting coal, iron, iron ore, lead, lead ore and seafood, which bring the country more than $1 billion (849,000 euros) in revenue.
It would also forbid countries to take in more North Korean laborers, enter into new joint ventures with North Korea or invest more in current ones. In addition, nine individuals and four entities have been added to the UN blacklist, including North Korea’s primary foreign exchange bank.
Stepping up the pressure
The measures are the first of such magnitude to be imposed on the recalcitrant nation since US President Donald Trump took office. Among other things, they indicate a willingness on the part of China to punish its ally and neighbor.
China and Russia have previously resisted the US’ push for sanctions, but Trump praised their decision to approve the latest measures, writing on Twitter: “China and Russia voted with us. Very big financial impact!”
Washington began negotiating on the resolution with Beijing a month ago in response to North Korea’s first intercontinental ballistic missile test on July 4. That test was followed by a second one on July 28.
Although severe, the new measures do not provide for the cuts to oil deliveries to North Korea that were initially proposed by the United States.
North Korea has been under UN sanctions since 2006 over its ballistic missile and nuclear programs.
rs, tj/jlw (AP, AFP, dpa, Reuters)