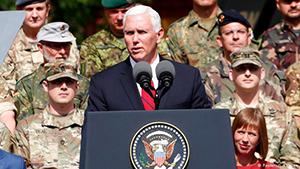 Mike Pence has denied a report that he is planning a presidential run in 2020. According to The New York Times, several Republicans are seeking to replace the party’s unpopular public face, Donald Trump.

In a White House statement released Sunday, Mike Pence called a report on his alleged plans to replace US President Donald Trump in 2020 “absurd,” “categorically false,” “disgraceful and offensive.”
The New York Times had detailed apparent Republican efforts to prepare for an aborted Trump presidency, citing the current turmoil around the US chief executive, including investigations into possible links between his 2016 campaign staff and Russia.
On a trip to central and eastern Europe and the Caucasus last week, for example, Pence repeatedly publicly differed from Trump on Russia. The vice president condemned the Kremlin’s presence in Georgia, with which Russia fought a war in 2008, and said ties would not improve until officials in Moscow changed their stance on Ukraine and withdrew support for such countries as Iran, Syria and North Korea.
Last week, Trump reluctantly signed into law a bill for new sanctions against Russia that had overwhelming support in Congress. He said US relations with Russia had fallen to an “all-time” low and blamed lawmakers for it.
White House counselor Kellyanne Conway also dismissed the report that Republicans would seek to topple their boss, and said Pence would dutifully run alongside Trump once more in 2020.
‘Political opportunists’
The article suggested that the vice president had become the “pacesetter” among a group of Republican “political opportunists” who had begun preparing to move in should Trump draw blame for any serious losses in 2018’s midterm legislative elections. According to the Times, Pence has created “an independent power base, cementing his status as Mr. Trump’s heir apparent,” and setting up a fundraising body, the Great America Committee, that overshadows the president’s.
The Times reported that Pence had showed his true intentions by appointing the “sharp-elbowed political operative” Nick Ayers – a fresh-faced Republican apparatchik who was once charged with alcohol-related reckless driving – as chief of staff. However, on Twitter, Ayers called the article a “total lie” and “#fakenews.”
In the past, Trump has reportedly chafed at any suggestion that members of his administration might seek to draw greater attention to themselves. Pence, too, seems to have chafed.
“The allegations in this article are categorically false and represent just the latest attempt by the media to divide this administration,” Pence said in Sunday’s statement. He added that he would focus all his efforts on seeing Trump re-elected: “Any suggestion otherwise is both laughable and absurd.”