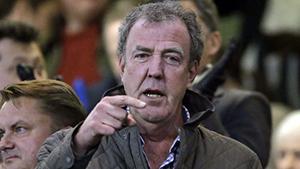 Jeremy Clarkson is in hospital in Spain being treated for pneumonia.

The Grand Tour host, 57, was admitted to hospital in Majorca on Friday, during a family holiday.

He posted a snap on Instagram of tubes in his arm and his hospital identity tags around his wrist, writing: “Not the sort of bangles I usually choose on holiday.”

Jeremy Clarkson was admitted to hospital on Friday morning during a family holiday in Spain and is being treated for pneumonia,” a spokesperson for The Grand Tour said.

Clarkson was on a break with his family after shooting the show with co-hosts Richard Hammond and James May, when he fell ill.

He had planned to return to work after his holiday.

In a message on Twitter, the ex-Top Gear host told friend Jemima Goldsmith that he was “in a wheelchair, connected up to tubes, in a hospital”.

The hospital incident comes two months after Hammond was airlifted to hospital when his car crashed while filming The Grand Tour.

The TV presenter, 47, was driving an electric super car in Switzerland when it crashed and burst into flames.

Hammond escaped the crash, which left the vehicle scorched and on its roof, with no serious injuries.

Clarkson was dropped from Top Gear in 2015 over what the BBC called an “unprovoked physical attack” on Oisin Tymon.

He went on to reveal that he thought he probably had cancer at the time he hit the Top Gear producer, but later got the all-clear.

Not the sort of bangles I usually choose on holiday