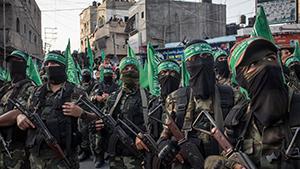 By Saud Abu Ramadan and Jonathan Ferziger
Hamas co-founder Mahmoud Zahar, whose eyebrows and beard were once shaved off by Palestinian security forces, listened quietly as the man blamed for his public humiliation proposed a partnership.

The scene played out last month through a video link that let Mohammed Dahlan — Yasser Arafat’s onetime chief enforcer in the Gaza Strip — address Palestinian legislators from exile in Abu Dhabi, spelling out a vision for reviving the blighted territory together. Zahar, 72, stared at the large screen from the defunct Palestinian parliament chamber and mumbled praise for new “understandings” reached with Dahlan.
“We hope that we will manage to forget the past and start over,” Dahlan said in an email interview after that July 27 appearance. “Hatred and differences should not last forever.”
What now unites the bitter enemies is a shared antipathy for Palestinian Authority President Mahmoud Abbas, and the belief that Dahlan, 55, can solve some of Gaza’s biggest problems with help from Egypt and the United Arab Emirates, where he’s lived since fleeing corruption charges in the West Bank in 2011. The unlikely alliance could have broader implications for regional politics, from the showdown with Qatar in the Persian Gulf, to Egypt’s and Israel’s war on Islamic militants, to the future of the Palestinian Authority amid new questions surrounding the health of its 82-year-old leader.
Ambitious Plans
Dahlan’s plans include building a $100 million power plant for the energy-starved territory, channeling Gulf petrodollars to Gaza’s poor and providing an orderly exit hatch for the population of 1.9 million fenced in for the past decade by Israel and Egypt.
Egyptian President Abdel-Fattah El-Sisi has encouraged Dahlan’s involvement in hopes of drawing Hamas away from its Egypt-based Muslim Brotherhood parent, whose ouster from power he led in 2013, said Mkhaimar Abusada, a Gaza-based political scientist at Al-Azhar University.
Egyptian analysts say El-Sisi’s ultimate aim is to throw open his country’s oft-closed border with Gaza in exchange for security cooperation from Hamas, which he accuses of abetting militants in Egypt’s Sinai peninsula. Israel, however, would need to be satisfied that wouldn’t allow weapons to be smuggled into Gaza to be used against it.
Dahlan’s ability to tap Abu Dhabi’s wealth could also help draw Hamas away from Qatar, now a pariah in the Gulf, Abusada said. Qatar, which has been boycotted for two months by a Saudi-led bloc that accuses it of sponsoring terrorism, hosts the Hamas leadership and has poured tens of millions of dollars into reconstruction following conflicts with Israel. It denies the alliance’s charges.
Dahlan’s involvement might also sideline Turkey, whose diplomatic ties with Israel have ebbed and flowed over its support for Hamas.
‘Restoring Hope’
That Hamas would join forces with a man notorious for once suppressing the movement is testimony to just how desperate its leaders have become. In the 10 years since Hamas seized control of Gaza from Abbas’s forces in a bloody coup, its economy has been brought to the brink of collapse by three wars with Israel, the sealing of its borders by Israel and Egypt, and the Egyptian military’s destruction of cross-border smuggling tunnels.
Abbas has recently tightened the screws by chopping the salaries of tens of thousands of Gazans on the Palestinian Authority payroll and persuading Israel to slash the amount of electricity it provides the strip.
After six years when he seldom appeared in public, Dahlan’s re-emergence in recent weeks comes at a tricky juncture for Palestinians. Concerns about the health of Abbas — a lifetime smoker with a history of heart trouble and prostate cancer — were rekindled with a mysterious late-July visit to the hospital.
Although he denies seeking to replace Abbas, Dahlan — looking vigorous on screen with his jet black hair and lavender tie — has maintained a steady presence in Palestinian public opinion polls about Abbas’s likely successor. His support is concentrated in Gaza and is virtually nil in the West Bank, where he’s blamed for failing to prevent the 2007 Hamas takeover of Gaza when he was in charge of Palestinian Authority security forces there.
Power Base
“He would like to come back home and compete again for political leadership from his base in Gaza,” Abusada says. “He has his own agenda and his own interests.”
Israel — the target of dozens of Hamas suicide bombings as well as rocket attacks — is closely following the Palestinian dynamic amid hopes that Dahlan could be a moderating influence on Hamas, now headed by former militia chief Yahya Sinwar. Israeli leaders know Dahlan well, both from incarcerating him in the 1980s and coordinating security forces and negotiating peace agreements with him in the 1990s.
While Dahlan’s popularity in Gaza is clear, Abbas still wields power, and Hamas is unwilling to give up its independent security forces — a concession the Palestinian leader considers key to unification.
“The whole idea is to bring Dahlan to Gaza so that he has a new power base to compete with Abbas, and people say, ‘Why not?’” says Yohanan Tzoref, a specialist on Palestinian affairs at Israel’s intelligence ministry. “Smarter people say, ‘No, it doesn’t work that way.’ Abu Mazen is sovereign and he says guns only in the hands of the government.”
— With assistance by Fadwa Hodali