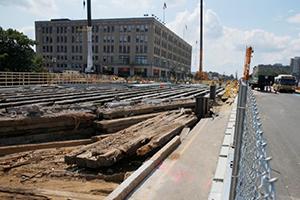 But nearly seven months later the administration has produced few details on the future of federal infrastructure funding, one reason why state and municipal governments have issued fewer bonds to improve roads, water systems and other projects so far in 2017.
An early budget by Republican Trump even proposed stripping popular transportation funding programs.
Through July, new municipal deals to fund transportation, utilities and power projects totaled $50.7 billion, down 19.4 percent from the same period last year, according to an analysis of Thomson Reuters data.
That decline outpaces a broader drop in the U.S. municipal bond market overall, with total issuance down 13.1 percent thus far in 2017 to $201.7 billion.
New deals have lagged since November’s post-election selloff, when state and local governments quickly issued bonds fearing potential policy changes and rate increases by the Federal Reserve.
Since then, the lower issuance has been driven by plummeting refunding volumes. Such refinancings dominated last year’s higher issuance levels, but the states and cities that sell such bonds were put off by the overall rise in rates.
“I think people started to realize that the agenda within the Trump administration wasn’t going to accelerate as quickly as had been advertised,” said Randy Gerardes, director of municipal securities research at Wells Fargo in New York.
That is discouraging news for commuters, travelers and the transportation industry that must contend with yawning gap of new projects and maintenance across the country. The American Society of Civil Engineers this year assigned a D+ grade to U.S. infrastructure.
The Trump administration has announced a 10-year $1 trillion infrastructure plan financed through $200 billion in government funding, underpinned by private investment.
While states and cities build most of the country’s public infrastructure, they rely on stable and predictable funding from the federal government to help complete those projects.
Historically, the U.S. financed the vast majority of its infrastructure through the tax-exempt, low-cost vehicle of the $3.8 trillion U.S. municipal bond market.
Work crews work to replace a bridge over the Massachusetts Turnpike, part of in MassDOT’s (Massachusetts Department of Transportation) Commonwealth Avenue Bridge Replacement Project, in Boston, Massachusetts, U.S., August 4, 2017.Brian Snyder
Trump’s plan to utilize private financing to spur the bulk of his infrastructure program is “unrealistic,” said James Grabovac, a managing director at McDonnell Investment Management.
But state and local governments may be “reluctant to engage in long-term infrastructure financing given that there’s a promise of a trillion-dollar federal investment program somewhere on the horizon,” Grabovac said.
‘BOND PICKER’S MARKET’
The dearth of infrastructure-related bond issuance has left a “bond picker’s market,” with more buyers than sellers.
“When deals do come to market, people are aggressively bidding them up,” said Gerardes. “That’s pushing up the price and down the rates.”
Revenue bonds, which often finance infrastructure projects because they are repaid with tolls, fares and fees instead of tax dollars, maintained a small but steady spread over general obligation bonds for all of 2014 and 2015.
But that narrowed in the final days of 2016, and revenue bonds are now trading on par with GO bonds. That is in part because belief in the safety of the GO pledge has waned since special revenue pledges led to better bondholder recoveries in some Chapter 9 bankruptcies.
Such competition for new deals could encourage governments to issue more bonds. But that hinges on the support of politicians and taxpayers, who typically pay higher user fees or increased taxes to service debts.
“Unfortunately neither one of those options are politically palatable,” said Gerardes.
State and local finances are also still pressured by lingering pension and retiree healthcare liabilities, leaving them wary of taking on more debt to fund infrastructure projects.
The tides may be changing, however. Last week transportation deals led the new issuance calendar, buoyed by deals from San Francisco, Washington, Georgia and Illinois.
Of all infrastructure sectors measured by Thomson Reuters – including water and sewer, highways and airports – public power saw the biggest drop in issuance of 57.4 percent below par value.
Bonds issued for seaports and marine terminals, however, increased by 134.1 percent and for bridges by 59.9 percent.
Reporting by Robin Respaut in San Francisco and Hilary Russ in New York; additional reporting by Melissa Wen in San Francisco; Editing by Daniel Bases and Grant McCool