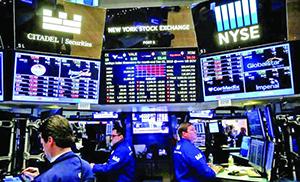 FRANK KANE
DUBAI: The New York Stock Exchange, the world’s biggest stock market, has launched a campaign to convince Middle East companies that it is the best place for big initial public offerings (IPOs), including the record-breaking forthcoming listing of Saudi Aramco.

Alexandre Ibrahim, the NYSE’s head of international capital markets, was in the UAE last week meeting advisers and corporate executives to persuade regional companies to consider New York ahead of global rivals like London for IPOs.
“We’re talking more now with Middle East chief executives than we were a year ago. If there is going to be a wave of IPOs here we want to explain that there are alternatives around the world. If there’s a planned listing anywhere in the world, we want to be part of that conversation,” he said in an exclusive interview with Arab News.
His visit comes as at least six companies in the UAE are believed to be considering IPOs, with some of them looking at the London Stock Exchange as a possible listing venue, in some cases alongside a listing on regional markets.
The biggest are Emirates Global Aluminium, with plans to raise about $3 billion, and the service operations of Abu Dhabi oil company ADNOC, with a similar target in its sights.
Although Ibrahim did not have meetings scheduled on the recent trip with representatives of Aramco, which is believed to be looking to raise up to $100 billion next year in the biggest IPO in history, he made it clear that NYSE wants to stage the Aramco IPO, and has already had talks with the Saudi giant.
“I can assure you that if a company has announced plans for an IPO, we are most likely speaking to them about the possibilities of listing on the NYSE. The NYSE excels at large, complex transactions, such as Alibaba. In fact, we’ve listed all of the largest IPOs for the past three years,” he said.
Alibaba, the Chinese online retailer, was the most valuable IPO ever when it sold shares on NYSE in 2014 in a $25 billion offering.
In a clear reference to Aramco, Ibrahim underlined the fact that the world’s biggest energy companies are also listed in New York. “NYSE is by far the biggest market for this sector, with most of the big names in global energy listed here — names such as Exxon, BP and Petrobras. Our market cap in the energy sector is significantly bigger than all of the other exchanges combined,” he said.
Aramco is believed to be considering a listing in either New York or London in addition to the Tadawul in Riyadh, as well as a possible presence on an Asian exchange such as Tokyo or Hong Kong.
So far, London has advanced the strongest case, with the UK regulator showing it is prepared to be flexible in listing requirements by creating a whole new category for sovereign listings. Some advisers to Aramco were recently reported to have recommended London as the main foreign listing center.
However, no final decision has been taken on the venue. Senior Saudi policymakers are thought to be more inclined toward New York, given the new “reset” relationship between the Kingdom and the US under President Donald Trump, cemented by the presidential visit to Riyadh in May.
New York, under its regulator the Securities and Exchange Commission (SEC), is often believed to have more rigorous rules on disclosure and transparency than London. The Sarbanes Oxley laws enacted after the Enron scandal in 2002 are often regarded as the strictest in the world, with severe penalties on individual executives for inaccurate financial information or fraudulent activity.
In addition, energy companies in the New York regime face tougher requirements on reporting oil reserves and earnings, and a more litigious culture among American lawyers.
However, NYSE officials are likely to point out that some of the more stringent measures of Sarbanes Oxley have been relaxed, for example with the 2012 Jobs Act aimed at encouraging smaller public listings.
Foreign companies are also exempt from some of the tough corporate governance rules of Sarbanes Oxley.
Further visits to the Arabian Gulf, including Saudi Arabia, are being planned for later this year, Ibrahim said.
No Middle East company has ever listed on the NYSE. Aramex, the regional logistics leader, had a quote on the rival Nasdaq market until 2002, when it was taken private by regional investors.
Some experts believe an NYSE quote for a Gulf company would allow it to be regarded as a proxy for emerging market investment by US institutions, which are currently unable to invest in equity in the Middle East via their own exchanges.
Ibrahim added: “An NYSE listing is not just a one-off transaction, but the beginning of an ongoing relationship with our listed companies.”