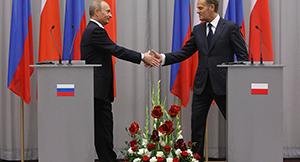 Russia has no intention to maintain dialogue with Poland and the normalization of bilateral relations depends on Moscow, Polish Foreign Minister Witold Waszczykowski told RIA Novosti in an interview.

WARSAW (Sputnik) — “There is absolutely no objection from Poland to keep the dialogue with Russia. There is no inclination from Russia to keep dialogue with Poland. I have been a minister for 21 months and I have not got an invitation from [Russian Foreign] minister [Sergey] Lavrov to visit Moscow and to talk to him… So, all the keys to improve relations between Poland and Russia are in Moscow, not in Poland. All the problems which are created between Russia and international community, were not initiated by Poland, but initiated by Russia” Waszczykowski said.
According to the minister, immediately after the Law and Justice party came to power in Poland in January 2016 a deputy foreign minister was sent to Moscow with the aim to start the bilateral dialogue.
“And a few days ago another deputy from my ministry went to Moscow to start the dialogue on future cooperation in the framework of the Security Council of the United Nations. I accepted with great pleasure the letter of minister Lavrov last month when he congratulated me when we were elected to the Security Council of the United Nations,” Waszczykowski added.
In March, Waszczykowski said that Poland was ready for constructive cooperation with Russia and was taking steps in this direction
The so-called Russian-Polish Group on Difficult Issues was established in 2002. Its purpose was to explain the “white spots” in bilateral relations in the context of historical events without politicizing them. The work of the group was halted in 2015 when the group’s head, Adam Rotfeld, left his post.
In February 2017, the Polish Foreign Ministry expressed the intention to resume the work of the group. The initiator of the move was Ambassador of Poland to Russia Wlodzimierz Marciniak.
Relations between Russia and Poland further deteriorated in 2014 amid the crisis in Ukraine, when the European Union introduced several rounds of sanctions against Moscow over its alleged meddling in the conflict. Russia denied the accusations.