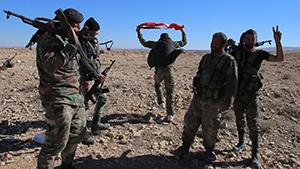 The Britain-based Syrian Observatory for Human Rights monitoring group said 30 IS militants were killed in the last 24 hours of battle for the town of al-Sukhna, in Homs, before it was captured Saturday by pro-government forces. It says the Russian air force provided air support and bombed the town.
Syrian military media reported the town’s capture on Sunday. The advance puts pro-government forces 68 miles (110 kilometers) from reaching companion forces trapped in Deir el-Zour in the Euphrates River valley, which have depended on risky supply flights and air drops for relief and weapons. IS militants have held the city under siege since 2015.
Also Sunday, Tourism Minister Beshr Yaziji said 530,000 people visited Syria during the first half of 2017, a 25 percent increase compared to the same period in 2016. His comments were reported on state media on Sunday.
Syria is home to a number of Muslim shrines and holy sites that draw religious pilgrims from across the Middle East. It is especially popular with Shiite worshippers visiting from Lebanon, Iraq, Iran and farther afield.
Pro-government forces, backed by Russian air power, were able to reclaim a number of contested sites from the Syrian opposition in 2016, bringing relative calm to the country’s two largest cities, Aleppo and Damascus, this year.