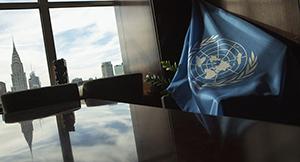 Carla del Ponte, a member of the UN Independent Commission of Inquiry on Syria, has announced she is quitting the body as no success has been achieved so far due to inaction of the UN Security Council.

MOSCOW (Sputnik) — “We have not achieved any success. I cannot be a member of the commission, which does not do anything… I am quitting this commission, which is not backed by any political will. I have no power as long as the [UN] Security Council does not take any action. We are powerless, there is no justice for Syria,” del Ponte told the Swiss newspaper Blick.
According to the media outlet, del Ponte has already prepared her resignation letter.
According to del Ponte, all sides of the Syrian conflict are fighting on “the evil’s side.”
“The government of President Bashar Assad perpetrated horrible crimes against humanity and used chemical weapons. And the opposition is now consists of extremists and terrorists,” del Ponted stressed.
The independent international commission of inquiry created in August 2011 brings together officials from different countries and seeks to investigate and record all violations of international law in the country under a mandate of the UN Human Rights Council.
Del Ponte, a former Swiss attorney general, joined the commission in September 2012.
The Syrian authorities have repeatedly said that they had never used chemical weapons against civilians or terrorists, and that the nation’s entire chemical arsenal had been destroyed under the supervision of the Organization for the Prohibition of Chemical Weapons (OPCW).