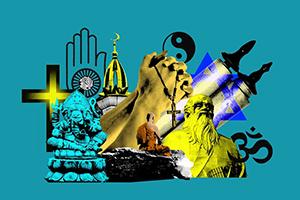 The story of one imprisoned prophet illustrates the difficulties of getting a “baby religion” off the ground.
Jon Emont- The atlantic

I asked Palmer if a reason why new faiths typically struggle to gain adherents is that we tend to laugh when we hear claims about fantastic and miraculous events that occur in the present day—such as when Vorilhon, the founder of Raëlism, claimed he learned about humanity’s origins after being abducted by aliens. “This is true,” she said. “We’re capable of accepting Muhammad’s claims of hearing God and Jesus’s claims of being the son of God, because it happened 1,000 or 2,000 years ago. The mist of time lends its authenticity. If someone today says these things, we’ll say he used to be a vacuum salesman or something.”
But the religion scholars I spoke with said that perhaps the biggest reason that new faiths like Scientology, Raëlism or Millah Abraham have failed to take off is the lack of state sponsorship. A major turning point for classical Christianity was when Constantine the Great decided to halt the persecution of Christians in the Empire, instead embracing elements of the faith. Over the next few centuries Christianity became the dominant religion in the Empire. Christianity wasn’t the only major religion to be boosted this way: Islam also spread by the sword, with armies sweeping forth to conquer and convert North Africa and Spain in the centuries after Muhammad’s death. Throughout their history both Buddhism and Hinduism have been powerfully lifted by state patronage.
Today, though, it is difficult to imagine that any new faith movement will get the boost of having a powerful state patronize the religion and fund its spread. In large part that’s because global norms have changed and—with the exception of a country like Saudi Arabia—few powerful states see it as their role to sponsor any faith, let alone a new faith. It’s also because there’s much less conquest today, meaning it would be unlikely that even a powerful country that adopted a new faith would be able to spread it by force. But, in an alternate reality, we can see how useful it would be for Millah Abraham if Indonesia’s government were to turn around and support Millah Abraham to the exclusion of other faiths, and proceed to conquer neighboring nations. Then there would be the possibility of its widespread adoption, at least in the region.
But even though state conquest does not offer the possibility to spread faiths quickly anymore, prophets today have more ways than ever to spread their teachings abroad. In a Singapore airport, I met with three Malaysian members of Millah Abraham who joined the faith after watching a Youtube video of Mushaddeq preaching. But this era of accessibility also comes with a downside for a new faith: There are so many religions on offer in most countries that it’s hard for any new religion to gain a critical mass.
“It’s a paradox of the current world that at the same time there is unprecedented opportunity for religious groups to spread but it also offers unprecedented competition in the religious field,” said Mayer, the Swiss historian of religion. “Even if you start with a very evangelistic intention, the likelihood is you might find a tiny percentage of the people interested in your offer.”
Mayer’s analysis uses the metaphor of the market, treating new religions as products that have to distinguish themselves from their competition in order to gain adherents. Early Christianity, for example, distinguished itself from many pagan beliefs with its intense focus on the afterlife, and the possibility of eternal salvation and heaven. “This was something that was really powerful for people, making people even willing to sacrifice their lives and believe it was worth doing,” Mayer said.
Looked at this way, any new religion, to be successful, would have to present millions of believers with an offer they couldn’t refuse. What would that look like?
“It must offer meaning, meaning to your life and your death that gives real answers that sound convincing,” said Mayer, adding that it would also have to offer a sense of community, and would benefit from being reasonably compatible with a scientific understanding of the world, given that we live in an era when many people treat scientific claims with respect. But he said that no new religion he is aware of currently qualifies.
Instead most of the dynamism is happening within existing faith traditions, as religious entrepreneurs within established traditions adapt their faiths to the needs of 21st-century parishioners, leading to trends like the major growth of Pentecostalism among former Catholics in Latin America and the rise of puritan strains of Islam around the Muslim world.
Mayer said that a few years ago he was asked to contribute an academic article assessing the possibility that a new, major religion would rise in the next 30 years. One plausible scenario he came up with was that a Chinese preacher might meld elements of Christianity with a “universalist message of inner harmony” and gain millions of followers.
The point is to never say never. “If something really meaningful is to be offered,” he said, “it cannot be completely ruled out” that it will become a new, globally influential religion.
Just don’t tell that to the Indonesian government.
Have you participated in a new religious movement or group? What about it was most powerful for you? Click here to share your story—we’ll publish some responses in a reader discussion in Notes.