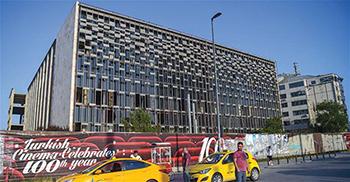 The Atatürk Cultural Center (AKM), a currently unused facility in the heart of Istanbul, will be demolished and rebuilt on a larger plot, according to plans seen by daily Hürriyet.

According to the plans in the pipeline for the new cultural center overlooking Taksim Square and Gezi Park, a shared taxi stop in front of the building, a multi-story car park nearby, parts of the Libya Consulate, and the front garden of a nearby cafe will be included in the plot. The total ground of the center will thus be expanded to 35,206 square meters from the current 5,794 square meters.

The new plan also includes opera, theater, cinema and concert halls, an exhibition center, and a convention hall, together with other facilities such as a library, a museum, an art gallery and commercial units such as a café and a restaurant.

The AKM’s new architect will be Murat Tabanlıoğlu, the son of architect Hayati Tabanlıoğlu who built the original AKM building in 1969, according to a report on private broadcaster CNN Türk.

President Recep Tayyip Erdoğan stated while hosting Turkish artists and athletes during a Ramadan fast-breaking meal on June 12 that the building would be renewed.

“We will build a magnificent opera house,” Erdoğan told reporters.

“We will truly bring a very beautiful monument in our Istanbul by means of taking down all the unused spaces that are next to and behind the current cultural center and integrating them to the new building complex. The project planning is done, we will start the execution,” he said.

The construction of the initial AKM building began on May 29, 1946. However, due to lack of a big enough grant, construction was stopped for many years. Ten years later, the construction restarted with Tabanlıoğlu as the architect. It was finished after 23 years and came into use on April 12, 1969 under the name Istanbul Cultural Palace. However, during a performance of Arthur Miller’s play “The Crucible” on Nov. 27, 1970 a tragic fire started in the building, which caused severe destruction.

Tabanlıoğlu repaired the building but it only reopened eight years later under a new name, the Atatürk Cultural Center.

In 2005, Atilla Koç, the culture minister of the time, proposed to demolish the building, saying it does not return enough economic profit. However, the ruling Justice and Development Party (AKP) abandoned this plan folloiwng intense reactions against the plan.

In November 2007, the Istanbul Protection Board registered the AKM as a cultural asset, and in February 2012 restoration work began with 30 million Turkish Liras in support from Sabancı Holding. This work was later cancelled as it emerged that restoration of the building was “impossible.”