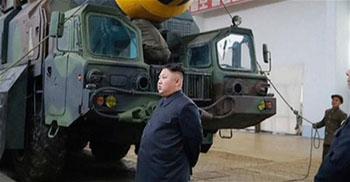 Beijing: North Korea has reacted angrily to international sanctions that will cut $1 billion from its exports, describing the new United Nations Security Council bans as “a rampant violation of our sovereignty”.

The sanctions were a “direct challenge to our republic” and “an effort to completely prevent economic development”, North Korean state media said on Monday.

The rogue state vowed to retaliate and in its usual bellicose language warned “a hundred or thousand fold price will be settled to the US, who is committing heinous crimes against our nation and people”.

North Korea demanded the US withdraw its “reckless attempt of crushing us”, threatening “we will not hesitate to adopt any final means” and that the US would not be safe on its side of the ocean.

The lengthy statement was the first reaction from North Korea since the UN Security Council resolution proposed by the United States was passed on Saturday, with the backing of China and Russia.

US President Donald Trump and South Korean President Moon Jae-in spoke by phone on Monday and said they would apply “maximum pressure” and continue with a joint military drill planned for later in August.

China has called for the US and South Korea to suspend military drills on the Korean Peninsula in return for North Korea agreeing to a weapons freeze and returning to dialogue, but the US has rejected this.

“My feeling is that the North is not completely rejecting the positive proposals by the South … we support the positive initiatives by the new South Korean government and we are willing to see such contacts happen as soon as possible,” Mr Wang said.

In a flurry of diplomatic activity, North Korea’s foreign minister, Ri Yong-ho, had a day earlier met with Mr Wang, his Russian counterpart, and even briefly met with his South Korean counterpart after the two bumped into one another waiting for an ASEAN event.

But when asked by South Korean foreign minister Kang Kyung-wha if North Korea would respond to its proposal for dialogue, Mr Ri reportedly replied: “Given the current situation in which the South collaborates with the US to heap pressure on the North, such proposals lacked sincerity.”

“As long as the US continues its anti-DPRK schemes and nuclear threat, we will not, whatever others say, put self-defensive nuclear deterrents on the negotiating table and will not make an inch back on the road to strengthening nuclear power,” the statement said.

US Secretary of State Rex Tillerson on Sunday said North Korea needed to stop its missile launches as a precondition for any talks.

Last week Mr Tillerson said the US wasn’t interested in regime change in North Korea, a statement welcomed by China, which appears to have stepped up its pressure on North Korea since the US threatened to spark a trade dispute with China last week.

Professor of Chinese Studies at the Lau China Institute at King’s College in London, Kerry Brown, said: “The only sensible thing Trump has done in the last few months has been being unrelenting in giving the Chinese pressure to do something on North Korea. That is because in some ways, the US has no choice … The Chinese should, and can, fix North Korea.”

He said the missile program had a domestic, as well as international security purpose.

“The only way they keep people obedient and consolidated around the leader is if they remind them they live their lives in constant fear of war with the US,” he said.