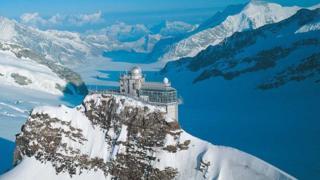 By Matt McGrath Environment correspondent
Potent, climate warming gases are being emitted into the atmosphere but are not being recorded in official inventories, a BBC investigation has found.

Air monitors in Switzerland have detected large quantities of one gas coming from a location in Italy.
However, the Italian submission to the UN records just a tiny amount of the substance being emitted.
Levels of some emissions from India and China are so uncertain that experts say their records are plus or minus 100%.
These flaws posed a bigger threat to the Paris climate agreement than US President Donald Trump’s intention to withdraw, researchers told BBC Radio 4’s Counting Carbon programme.
Among the key provisions of the Paris climate deal, signed by 195 countries in December 2015, is the requirement that every country, rich or poor, has to submit an inventory of its greenhouse-gas emissions every two years.
Under UN rules, most countries produce “bottom-up” records, based on how many car journeys are made or how much energy is used for heating homes and offices.
But air-sampling programmes that record actual levels of gases, such as those run by the UK and Switzerland, sometimes reveal errors and omissions.
In 2011, Swiss scientists first published their data on levels of a gas called HFC-23 coming from a location in northern Italy.
Between 2008 and 2010, they had recorded samples of the chemical, produced in the refrigeration and air conditioning industries, which is 14,800 times more warming to the atmosphere than CO2.
Now the scientists, at the Jungfraujoch Swiss air monitoring station, have told the BBC the gas is still going into the atmosphere.
“Our estimate for this location in Italy is about 60-80 tonnes of this substance being emitted every year, then we can compare this with the Italian emission inventory, and that is quite interesting because the official inventory says below 10 tonnes or in the region of two to three tonnes,” said Dr Stefan Reimann, from the Swiss Federal Laboratories for Materials Science and Technology.
“They actually say it is happening, but they don’t think it is happening as much as we see.
“Just to put it into perspective, this greenhouse gas is thousands of times stronger than CO2.
“So, that would be like an Italian town of 80,000 inhabitants not emitting any CO2.”
The Italian environment agency told the BBC its inventory was correct and complied with UN regulations and it did not accept the Swiss figures.
Another rare warming gas, carbon tetrachloride, once popular as a refrigerant and a solvent but very damaging to the ozone layer, has been banned in Europe since 2002.
But Dr Reimann told Counting Carbon: “We still see 10,000-20,000 tonnes coming out of China every year.”
“That is something that shouldn’t be there.
“There is actually no Chinese inventory for these gases, as they are banned and industry shouldn’t be releasing them anymore.”
China’s approach to reporting its overall output of warming gases to the UN is also subject to constant and significant revisions.
Its last submission ran to about 30 pages – the UK’s, by contrast, runs to several hundred.
Back in 2007, China simply refused to accept, in official documents, that it had become the largest emitter of CO2.
“I was working in China in 2007,” said Dr Angel Hsu, from Yale University.
“I would include a citation and statistics that made this claim of China’s position as the number one emitter – these were just stricken out, and I was told the Chinese government doesn’t yet recognise this particular statistic so we are not going to include it.”
A report in 2015 suggested one error in China’s statistics amounted to 10% of global emissions in 2013.
The BBC investigation also discovered vast uncertainties in carbon emissions inventories, particularly in developing countries.
Methane, the second most abundant greenhouse gas after CO2, is produced by microbe activity in marshlands, in rice cultivation, from landfill, from agriculture and in the production of fossil fuels.
Global levels have been rising in recent years, and scientists are unsure why.
For a country such as India, home to 15% of the world’s livestock, methane is a very important gas in their inventory – but the amount produced is subject to a high degree of uncertainty.
“What they note is that methane emissions are about 50% uncertain for categories like ruminants, so what this means is that the emissions they submit could be plus or minus 50% of what’s been submitted,” said Dr Anita Ganesan, from the University of Bristol, who has overseen air monitoring research in the country.
“For nitrous oxide, that’s 100%.”
There are similar uncertainties with methane emissions in Russia, of between 30-40%, according to scientists who work there.
“What we’re worried about is what the planet experiences, never mind what the statistics are,” said Prof Euan Nisbet, from Royal Holloway, University of London.
“In the air, we see methane going up. The warming impact from that methane is enough to derail Paris.”
The rules covering how countries report their emissions are currently being negotiated.
But Prof Glen Peters, from the Centre for International Climate Research, in Oslo, said: “The core part of Paris [is] the global stock-takes which are going to happen every five years, and after the stock-takes countries are meant to raise their ambition, but if you can’t track progress sufficiently, which is the whole point of these stock-takes, you basically can’t do anything.
“So, without good data as a basis, Paris essentially collapses. It just becomes a talkfest without much progress.”