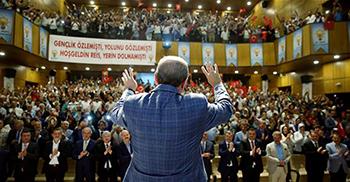 President Recep Tayyip Erdoğan on Aug. 7 urged his ruling Justice and Development Party (AKP) members to put in greater effort for the parliamentary and presidential elections in 2019, while heralding a broad change within the party organization.

Speaking at the AKP’s extended provincial advisory council meeting in the Black Sea province of Rize, Erdoğan said the elections due in 2019 would be the “most challenging” compared with previous elections.

“We saw how hard it is to get over 50 percent of the votes in the [April 16] referendum and in previous elections. That picture tells us that we need to tightly prepare for 2019,” he added.

Erdoğan also repeated warnings about “weariness” among some party members.

“I have expressed many times that I see indications of ‘metal weariness’ in some of our organizations. We have to make a wide-scale change in our organizations, taking advantage of the process at our upcoming grand congress. As the party chairman, I am determined on this issue. We will continue on our path with friends who have the dynamism that is able to meet our nation’s expectations,” he added.

Erdoğan stressed that all AKP members must first address the “nation and the party cause” before anything else.

“Anyone who attempts to form an activity within the party in the style of the political barons of 25 years ago will face this brother of yours. You should know that. Such malignancy against the party is tantamount to malignancy against all of Turkey. Our country needs us and we need to crown our deeds over the last 15 years with our 2023 targets. This is what the nation expects from us,” he said.