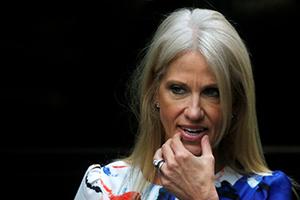 Trump’s most adept spin doctor admitted that the president’s numbers need “to go up.”
By Dominique Mosbergen

Kellyanne Conway has earned a reputation as being an adept dodger of any question that could cast President Donald Trump in a negative light. So her admission on Sunday that Trump’s approval rating needed improvement was an unusual deviation for the president’s counselor.
Conway told ABC’s “This Week” that Trump’s “approval rating among Republicans, conservatives and Trump voters is down slightly. It needs to go up.”
She added that voters were urging Trump to focus on fulfilling his campaign promises rather than worrying about a squabbling Congress.
“They are telling him just enact your program,” Conway said. “Don’t worry about a Congress that isn’t supporting legislation to get big-ticket items done. And don’t worry about all the distractions, diversions and discouragement that others who are still trying to throw logs in your path are throwing your way. Focus on the agenda and he’s doing that. Nobody can deny these economic numbers.”
According to a HuffPost Pollster aggregate of publicly available surveys, Trump’s average approval rating plummeted to a new low of less than 38 percent last week despite a positive economic outlook for the country. More than 58 percent said they disapproved of the way Trump was doing his job.