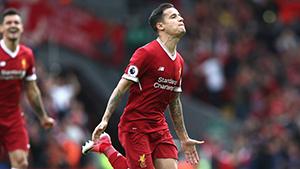 The Reds will not be able to hold on to 25-year-old Coutinho this summer, says club legend Graeme Souness.(Sky Sports)

Liverpool are set to resurrect their £60m move for Virgil van Dijk after the Southampton defender, 26, handed in a transfer request. (Daily Star)

Arsenal should signed Van Dijk as well as midfielder Nemanja Matic, who moved from Chelsea to Manchester United for £40m, because the club lacks leadership on the pitch, according to former Gunners striker Ian Wright. (BBC Radio 5 live)

Leicester City are set to announce the signing of Coventry City’s Leicester-born forward George Thomas, 20, for £450,000 plus add-ons. (Coventry Telegraph)

Theo Walcott says Arsenal’s new signing Sead Kolasinac is “an absolute animal” and believes the defender could become one of the best in the Premier League. (Guardian)

Chelsea striker Michy Batshuayi has denied suggestions he laughed at team-mate Alvaro Morata, who missed a spot-kick, during the Blues’ penalty shootout defeat by Arsenal in the Community Shield. (Daily Mail)

Former Arsenal and England defender Tony Adams is leading a consortium which has struck an agreement to buy Crystal Palace for £200m. (Daily Star)

Liverpool are making a mistake refusing to bring French defender Mamadou Sakho, 27, back into the first-team squad – according to former midfielder Momo Sissoko. (Liverpool Echo)

Leicester City’s former Manchester United midfielder Matty James, 26, is set to play for the Foxes for the first time in 825 days. (Leicester Mercury)

Some of your information will be collected when you use this feature. Find out more
Best of Monday’s transfer news

Liverpool attacking midfielder Philippe Coutinho, 25, would like to move to Barcelona if a deal can be done amicably with his club. (Sky Sports)

Barcelona will face competition from Paris St-Germain for the Brazil international’s signature with the Ligue 1 club ready to bid £100m for the player. (Le Parisien – in French)

Manchester United have had a £36m bid for Barcelona’s Sergi Roberto rejected and Chelsea could soon join the race for the 25-year-old right-back. (Mail)

Chile forward Alexis Sanchez, 28, is ready to accept Arsenal’s refusal to sell him and will see out the final year of his contract before leaving on a free transfer next year. (Mirror)