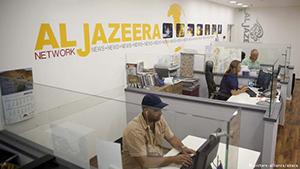 Human rights groups have denounced attempts by the Israeli government to shutter Al-Jazeera’s operations in the country. Israeli officials have accused the Qatari-owned broadcaster of “supporting terrorism.”

Human rights watchdog Amnesty International has criticized the Israeli government for attempting to shut down the Al-Jazeera bureau in Jerusalem.
“This is a brazen attack on media freedom in Israel and the Occupied Palestinian Territories. The move sends a chilling message that the Israeli authorities will not tolerate critical coverage,” Amnesty said in a statement on Monday.
On Sunday, Israeli Communications Minister Ayoob Kara announced the government’s intention to shutter the Qatari-owned broadcaster’s operations in Israel.
Kara said he requested that the Government Press Office, responsible for press accreditation in Israel, revoke Al-Jazeera’s operating license and withdraw credentials from journalists working for the channel. However, the move was met with condemnation..
“All journalists should be free to carry out their work without facing harassment or intimidation. Instead of initiating a repressive clampdown on freedom of expression, the Israeli authorities must halt any attempt to silence critical media,” said Amnesty International.
‘Supporting terrorism’
Israel has regularly criticized the news network for its coverage of the Israeli-Palestinian conflict. Last month, Israeli Prime Minister Benjamin Netanyahu said he wanted Al-Jazeera expelled from the country, in part for its coverage of protests at the Al-Aqsa Mosque at the hilltop compound known as the Temple Mount.
The communication minister claimed that militant groups used the broadcaster as a way to “incite” violence, accusing the Doha-based network of “supporting terrorism.”
“Lately, almost all countries in our region determined that Al-Jazeera supports terrorism, supports religious radicalization,” Kara said.
“And when we see that all these countries have determined as fact that Al-Jazeera is a tool of the ‘Islamic State,’ Hamas, Hezbollah and Iran, and we are the only one who have not determined that, then something delusional is happening here.”
Al-Jazeera has vehemently denied the allegations, saying they are unfounded. “Al-Jazeera denounces this decision made by a state that claims to be ‘the only democratic state in the Middle East,” it said in a statement.
Israel ranked 91 out of 180 countries in Reporters Without Borders’ 2017 World Press Freedom Index.