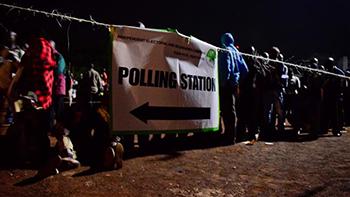 Voters are heading to the polls in Kenya to elect a new president and other country officials in a tight race, which pits incumbent President Uhuru Kenyatta against his longtime rival, Raila Odinga.
Kenyan television showed voters forming long lines outside polling stations across the country before the official start of voting at 6 a.m. local time (0300 GMT) on Tuesday.

The polls are set to close at 5 p.m. local time (1400 GMT). Officials have said vote counting would start immediately, with the results expected to be out within 24 to 48 hours.
Nearly 20 million Kenyans are eligible to cast their vote in 40,000 polling stations.
Kenyatta, 55, has the support of many in Kikuyus and Kalenjins tribes, while Odinga, 72, is popular among the Luos, Luhyas and Kambas.
Kenyatta has been in office since 2013. Odinga also served as prime minister from 2008 to 2013.
Pre-election surveys indicated that the two were virtually tied in the race.
Fears of electoral violence rose in East Africa’s richest economy in late July as the campaign ended with the murder of a top election official.
Odinga has repeated claims that the vote would be rigged. He says elections in 2007 and 2013 were stolen from him.
The president has also accused Odinga of trying to divide the nation and provoke violence.
In 2013, Kenyatta emerged victorious by a thin margin, with just over 50 percent of the vote. Odinga leveled vote-tampering allegations against Kenyatta’s ruling party and took his case to Kenya’s highest court, which ruled in favor of the winner.
Besides picking a president, Kenyans are also voting in five other elections, choosing governors, lawmakers, senators, women’s representatives and other country officials.
Kenyatta addressed the nation Monday night in an effort to ease tensions, calling on citizens to vote “in peace.”
The incumbent president is under fire for soaring food prices and massive corruption scandals during his term in office.
According to the election law, the winner of the presidential race must secure more than 50 percent of the votes as well as one-quarter or more votes in at least 24 of the country’s 47 counties.