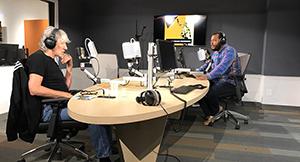 Radio Sputnik’s Eugene Puryear of By Any Means Necessary spoke with Roger Waters, founding member of the legendary Pink Floyd, about the Boycott, Divestment and Sanctions movement and exercising free speech even when it comes to the inflammatory Israel-Palestine conflict.

Pink Floyd’s Roger Waters stopped by Radio Sputnik’s Washington offices to discuss the Boycott, Divestment, Sanctions (BDS) movement on Monday morning with By Any Means Necessary, amid charges from the Jewish Community Relations Council that Waters’ activism has “crossed the line into anti-Semitism.”
“Here we have a non-violent movement steeped deeply in [the methods pioneered by] Martin Luther King, Ghandi, so many people who are so revered worldwide. But when you put BDS and Israel together the vitriol toward it seems so out of whack with how we’re taught to remember non-violent civil disobedience,” By Any Means Necessary host Eugene Puryear said.
The backlash against the 12-year-old BDS movement stems from “completely understandable bitterness that followed the way the Jewish people were treated in northern Europe and western Europe in the 1930s, 1940s and Second World War,” Waters said. This justified sentiment, however, has been “diverted into an exceptionalistic extremism that knows no boundaries of behavior,” the songwriter pointed out.
— BAMNecessary (@bamnecessary) August 7, 2017
As it gains strength, BDS is emerging as one of the most divisive movements across the global political landscape. In the past several years, some US churches, students’ and teachers’ organizations and high-level academics have made pledges to divest from Israeli businesses and institutions; on Saturday, the fast-growing Democratic Socialists of America, a party associated with former presidential candidate Bernie Sanders, passed a resolution endorsing the movement at its national convention in Chicago.
Meanwhile, the bipartisan Israel Anti-Boycott Act introduced into the US Senate in March, would make support for international boycotts against Israel a felony.

Proponents on both sides of the issue are running for the garrisons, preparing for political war.
“On the altar of Zionism, they want to tear up the Constitution,” Waters said, pointing to First Amendment free speech rights that would be “scratched out” if the Israel Anti-Boycott Act becomes law.
The American Israel Public Affairs Committee (AIPAC) is “terrified” that public discourse will stray too far from the status quo of supporting Israel almost without question, Waters noted of the powerful Washington lobbyist group. Particularly, AIPAC and its kin are wary of word getting around about the “oppression” of Palestinians in occupied territories, the artist said. “If somebody suggests there might be an alternative narrative, they want them silenced.”
On June 5, Waters wrote an open letter to Radiohead to protest that band’s crossing the BDS picket line earlier in the year to play a show in Tel Aviv. “Today is the 50th anniversary of the occupation of Palestine by Israel,” the bassist and songwriter wrote. “Fifty years living under military occupation, 50 years for a people with no civil rights, 50 years of no recourse to the law, 50 years of apartheid.”
The BDS picket line “exists to shine a light on the predicament of the occupied people of Palestine, both in Palestine and those displaced abroad, and to promote equal civil rights for all the people living between the Jordan River and the Mediterranean Sea no matter what their nationality, race or religion,” Waters’ letter reads.
Another prominent pro-Israel lobby in Washington, the Jewish Community Relations Council (JCRC) of Greater Washington, released a video ahead of Waters’ shows in Washington over the weekend, criticizing the musician for “using music to divide people.”
— StandWithUs (@StandWithUs) August 5, 2017
JCRC executive director Ron Halber called Waters “an embarrassment” during an interview with the Washington Post published in a Saturday column. “I advise him to stick to music and stop talking about things he knows nothing about,” Halber said.
Benjamin Balthaser, a Jew who joined DSA last year, told the Intercept “the Israeli government says it represents all Jews in the world … I think it’s very important for the Jewish community to say, ‘We don’t feel represented by an apartheid government. We don’t feel represented by a military occupation.'”
Regarding the intersection of the BDS movement and pending legislation that would criminalize the boycott, the legendary musician said, “We’re arriving at a fundamental crunch point where your civil liberties are being attacked by what is essentially an agent of a foreign government.”
Tel Aviv to Waters: Wish you were here.