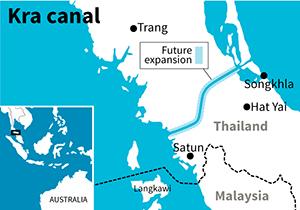 Lindsay Murdoch
A group of influential retired Thai generals, politicians, academics and businessmen with close links to China have revived plans to construct a US$28 billion ($35 billion) and 135 kilometre canal across southern Thailand to link the Indian and Pacific oceans.

Seen as an Asian equivalent of the Suez or Panama canals, the so-called Kra canal would save at least 1200 kilometres, or two to three days sailing time, for ships bypassing the narrow, traffic-choked and piracy-prone Malacca Strait, which links China, Japan and other Asian nations to the oil fields of the Middle East and markets in Europe, Africa and India.

A record 84,000 ships passed through the Malacca Strait last year, close to its capacity.

The Nikkei Asian Review reports that a group called the Thai Canal Association of Study and Development is trying to persuade Thailand’s prime minister Prayuth Chan-ocha to approve a feasibility study. The plan would be one of the most ambitious mega-projects ever undertaken in Asia that could be funded through China’s multi-billion dollar Belt and Road and New Maritime Silk Road initiatives, aimed at reshaping trade across Asia.

“We hope the people will send a message to the government to pick-up this project,” said Pongthep Tesprateep, a former Thai army chief of staff who chairs Thai Canal Association.

“It is a project that is very good for our country and the world but until now has been left under the table gathering dust,” he told the Review.

China would be one of the biggest beneficiaries of a 450-metre-wide and 26-metre deep canal capable of carrying the world’s biggest oil tankers, container ships and bulk tankers.

Mr Prayuth, who seized power in a 2014 coup, said in June he did not support the project because separating Thailand’s south could embolden Muslim-Malay separatists who have waged a bloody insurgency against the Thai state for more than a decade.

In May both China and Thailand denied media reports they had signed an agreement to build the canal which would also deprive Singapore of an estimated 30 per cent of its shipping trade, challenging the regional dominance of the city-state’s harbour.

In a speech earlier this year Singapore’s Senior Minister of State Josephine Tao said it was too early to determine the impact of potential regional port developments, including the Kra canal on Singapore.

“Our starting point is that others can and will up their game,” she said.

“Whatever the analysis, the only response that will serve our long-term interests is to keep improving to stay ahead. Therefore it is not enough to build bigger ports….we need smarter ports.”

The canal, which is also known as Kra Isthmus Canal, was first suggested by a Thai king in 1677 and the idea has been raised again over centuries.

But it never eventuated due to the high cost and complexities of building, and environmental repercussions.

In 2005 a report for then US Defence Secretary Donald Rumsfield leaked to the Washington Post said China was prepared to underwrite the project which called for construction over 10 years employing 30,000 workers.

The project will be discussed at an international conference in Bangkok in September.